Stormers lead the way as Reds humiliated in rugby Super 15 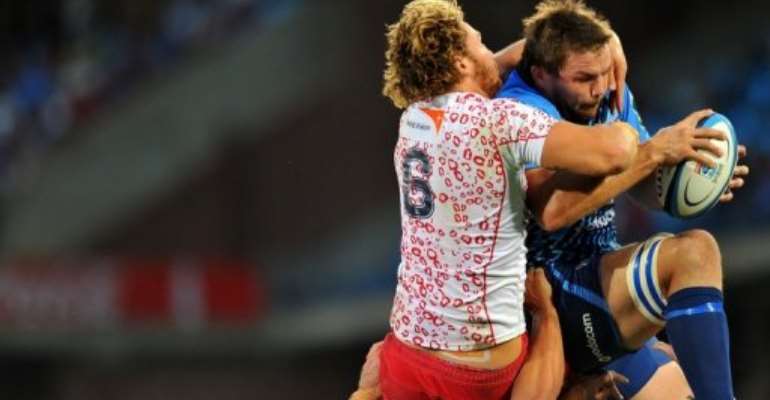 Defending Super 15 champions Queensland Reds were left in tatters by the Northern Bulls in Pretoria on Saturday. By Alexander Joe (AFP)

SYDNEY (AFP) - South Africa's Western Stormers remained the only unbeaten team in the Super 15 series as defending champions Queensland Reds were left in tatters by the Northern Bulls this weekend.

The Cape Town-based Stormers struggled to a 24-19 win over the Golden Lions in Johannesburg to top the South Africa conference with four wins and lead New Zealand's Waikato Chiefs and ACT Brumbies of Australia in the overall table.

Three-time champions Northern Bulls ran riot in the second half to overwhelm the injury-hit Reds 61-8 in Pretoria for Queensland's second defeat in five outings this campaign.

The much-improved Brumbies, Super Rugby champions in 2001 and 2004, ended the Otago Highlanders' unbeaten start to the season with a tenacious 33-26 victory to go top of the Australia conference, while the Chiefs received four points from a bye.

The Bulls leapfrogged the Highlanders into fourth spot, while the Wellington Hurricanes moved to sixth after sinking the Auckland Blues with a last-minute try for a 26-25 win at Eden Park.

Seven-time champions Canterbury Crusaders celebrated their first home game in 22 months by snatching a late 28-21 win over the Central Cheetahs at their new AMI Stadium.

The New South Wales Waratahs bounced back from a disappointing defeat to pull off a determined 34-30 win over South Africa's Coastal Sharks in Sydney.

In the weekend's other game, stop-gap kicker Mark Gerrard landed a late penalty to end the Melbourne Rebels' losing 12-match run with a thrilling 30-29 home win over Western Force.

The Stormers went ahead after 72 seconds at Ellis Park with hooker Tiaan Liebenberg scoring a try and it seemed likely to be an easy night for last year's semi-finalists when they raced into an 18-0 lead after 20 minutes.

But the Lions dominated for the rest of the match, competing ferociously in broken play, keeping the ball in hand and forcing the Stormers to make more than 100 tackles.

At Loftus Versfeld, the Queensland Reds looked a pale shadow of the team that defeated the Crusaders in Brisbane last year for a maiden southern hemisphere provincial title.

The Bulls, who led 16-3 at halftime, crushed the Reds with 45 points in the second half for one of Queensland's heaviest losses.

The Highlanders continued to find the national capital a difficult place to win and have now won only twice in nine visits.

The expensively assembled Auckland Blues' dismal season continued against the Hurricanes and they have only one win from five matches.

The Hurricanes secured a bonus point after scoring four tries to one, with skipper Conrad Smith's second five-pointer in the final minute and a conversion from fullback Beauden Barrett proving the difference.

In an emotional homecoming before a sellout crowd of 17,500, the Crusaders outscored the Cheetahs three tries to two to open their new ground in Christchurch with only their second win of the season from four outings.

Their former home ground was wrecked in a devastating earthquake in February last year, forcing them to play all their 2011 games on the road.

The Waratahs bounced back from their much-criticised 21-20 home loss to the Western Force the previous week but it took a late converted try from winger Tom Kingston to clinch victory over the Sharks.