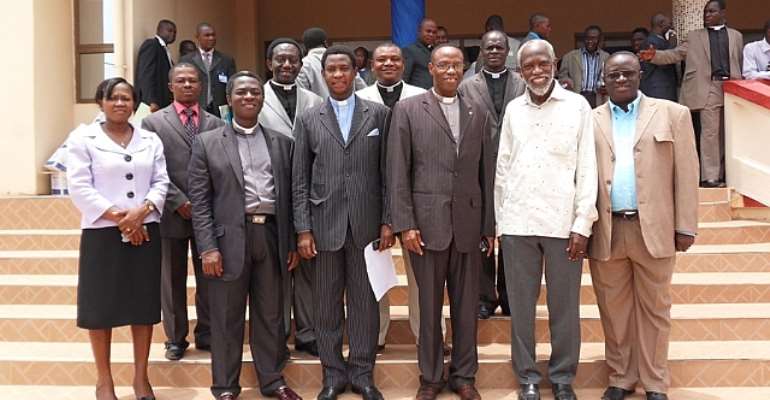 Accra, March 24, GNA - The General Council of the Christ Apostolic Church International (CACI), has commended Government for efforts in stemming crime and other vices in the bid to maintain peace in the country.

“As a church, we have observed with admiration the efforts of the Government to combat violent crimes, poverty, illiteracy, diseases, corruption, tribalism and nepotism. We believe these have contributed to the relative economic gains, peace and national cohesion that we see and making Ghana a toast in the comity of nations.

We also wish to acknowledge the government's quest to deepen the culture of rule of law and respect for human rights in the country. It is our expectation that the liberalized media atmosphere in the country would be positively utilized to further deepen greater transparency and good governance.”

These were contained in a communiqué issued at the end of a one-week CACI's Ministerial and General Council meeting in Kumasi, which ended at the weekend on the theme: “Let this mind be in You”.

The annual meeting allows the church to assess activities, discuss achievements and challenges in past year and plan for the future.

We commend the Government highly for its firm stand against homosexual practices in Ghana. It is our expectation and prayer that, the government would endeavour to hold firmly to this stance against the rising pressure from international bodies.”

The communiqué said notwithstanding those positive gains, “As a church we are concerned with the growing usage of vulgar language and hate speech in political discourse. The media has become a medium for insulting one another to the dismay of many. We are even more concerned, taking into account the fact that this is an election year. With the political tempo already heating up, we believe that if these are not stopped, the likelihood of violence cannot be ruled out.

We are also unhappy with the growing streetism and the widening gap between the rich and the poor and humbly wish to make the following recommendation to the government and all well meaning Ghanaians.”

The statement said the leadership of the various interest groups should openly express their disgust and disassociation from the dangerous sub-culture of political insults and character assassination and that people who used insulting and inflammatory languages should not be rewarded.

It saud: “They are certainly neither heroes nor role models and they should not be honoured”.

The Church said it was thankful to God for the discovery of oil in commercial quantities in the country, and called on the Government to adhere to the best practices to make the find a blessing instead of a curse.

The high hopes and expectations among Ghanaians about the likely impact of oil in the country must be carefully managed, the communiqué said.

It said:“We also admonish for the right local content policies to make Ghanaians true beneficiaries of the oil sector of the economy instead of mere spectators. In this regard we advocate for the necessary human resource development support by the Government to equip the Ghanaian to participate in the oil sector.”

The communiqué called for a level playing field to ensure free, fair and transparent presidential and parliamentary elections, and asked the Electoral Commission to maintain its good and enviable record.

It said “While we call on all Ghanaians to actively partake in the biometric electoral registration exercise, we call on all young people to desist from lending themselves to unscrupulous politicians to be used as instruments of political violence.

The churches and other religious bodies must use their platforms to propagate peace and love for one another to ensure national unity, peace and cohesion.”

The statement called for the intensification of public education by the National Road Safety Commission on traffic regulations.

It said there was the need to properly resource the Motor Transport and Traffic Unit of the Ghana Police Service to enable it to enforce traffic laws.

The communiqué called for the eradication of corruption among politicians, public office holders and civil servants and the judiciary, police and other law enforcement agencies should be strengthened and well resourced.

It said violent crime such as armed robbery, as well as rape, homosexuality, sodomy should be fought with all the resources at the disposal of the nation.

The communiqué asked churches support Government and the law enforcement agencies in the discharge of their duties.

It said “Teenage pregnancy and the high rate of school dropout should be checked through intensive public education and increased accessibility to education. District assemblies and religious bodies should play key roles in education, particularly of the girl-child.

We appeal to all party functionaries and the entire populace to desist from politicizing all manner of issues, including those that bother on security, safety, social-economic development and peace and condemn in no uncertain terms compatriots who engage in sowing seeds of disunity among the various ethnic groups and also fanning nepotism in the country.”

The statement enjoined all leaders including political, religious, the media and academia to collectively fight those unpatriotic tendencies, which were tearing Ghana apart.