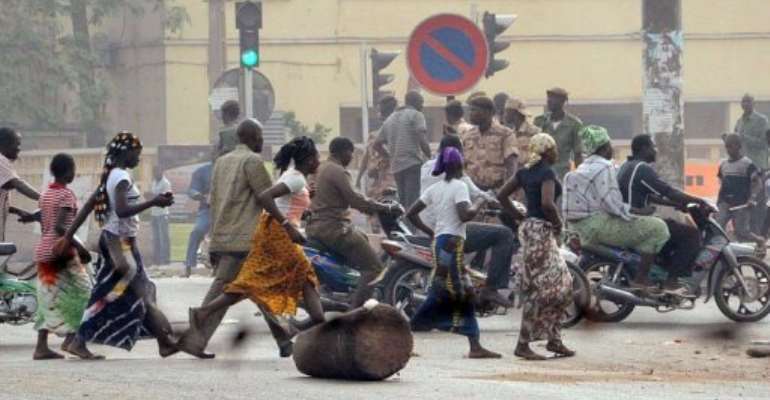 Residents run past soldiers in a street of Bamako. By Habibou Kouyate (AFP)

WASHINGTON (AFP) - The World Bank and the African Development Bank announced Thursday they were suspending their development aid to Mali after a coup d'etat ousted President Amadou Toumani Toure.

The two multilateral lending institutions said they were joining the African Union and the West Africa regional bloc ECOWAS in "condemning the military coup, urging a speedy resolution of the crisis and calling for the restoration of constitutional government to preserve the development gains of the country and its people."

"Our development operations are suspended, with the exception of emergency assistance," they added in a joint statement.

The banks noted that Mali was in the final stages of preparing for democratic elections due to take place next month, and had made "steady economic and social progress, and strengthened its democratic governance" in recent years.

What began Wednesday as a mutiny over the government's response to the rekindled Tuareg insurrection turned into a full-blown coup as soldiers seized control of the presidential palace and state broadcaster.

Mali is usually seen as politically stable, but smouldering troubles in the north where Tuareg tribes have long felt ignored by a southern government and Al-Qaeda has taken deep root and have turned the region into a tinderbox.

This was ignited when the demise of Libya's Moamer Kadhafi sparked the return of hundreds of heavily-armed Tuareg who had fought for him and were ready to take up a decades-long struggle for independence.