RE: Why we say Mills' achievements are unprecedented 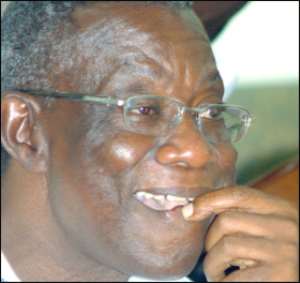 More grease to the elbows of President Evans Fiifi Atta Mills. His NDC government according to Hon Okudzeto Ablakwah have chalked awesome achievements unprecedented in the socio-politico-economic history of Ghana. His achievements within three years in office far exceed and dwarf the much touted achievements of the late Charismatic and visionary ex-President of Ghana, Dr Kwame Nkrumah.

I refer the Ghanaian public to Ghanaweb General News of Tuesday, 20 March 2012 to the news item captioned " Why we say Mills' achievements are unprecedented" I personally find certain submissions very worrying. Mr Ablakwah takes Ghanaians for nincompoops else, he would not have come up with some of the supposed achievements to justify how better President Mills is, compared to his predecessors. There is no wonder President Mills' government is full of first time politicians teasingly referred to as "Team B" Ministers by former President J. J. Rawlings. They are completely square pegs wobbling in round holes or the vice versa.

Mr Ablakwah considers the success of President Mills at securing $3 Billion Chinese loan a fantastic achievement that makes Ghanaians very proud. The interest on the loan will come up to $2.5 Billion by the time Ghana completes paying off the loan. President Kufour discovered petroleum in commercial quantities. President Mills used the discovered oil by Former President Kufuor as a sovereign guarantee to obtain the Chinese loan. President Kufuor apart from the money raised from the HIPC initiative, used locally generated money to carry out infrastructural developments and other social interventions in the country. Which of these two persons is more farsighted let alone comparing President Mills to the late President Dr. Kwame Nkrumah?

Mr Ablakwah talks about Anti-Corruption under the Mills' NDC government. He mentions President Mills ordering the arrest of Alfred Agbesi Woyome, their own party financier. It indicates President Mills' zero tolerance for corruption. Moreover, he readily stands to pass the squeaky-clean test. This young man is very funny. The NDC connived to enrich one of their kinds through a complete daylight robbery for reasons best known to them. President Mills was well aware of the dubiety of the judgment debt payment to Woyome before, during and after payment yet he denied of any prior knowledge. His government appointees came out like swarm of bees to defend Woyome but for the vivacity and audacity of the Most Hon Kennedy Agyapong, NDC and Woyome are exposed. President Mills was under intense public pressure to act else, he would have permitted Agbesi Woyome to keep the money of which the NDC would have directly benefited, Woyome being their principal bankroller.

Wage Bill has more than doubled in three years, from GHC2 Billion to GHC5 Billion. Subsequently, President Mills has put more money in the pockets of Ghanaians to spend, alleges Hon Ablakwah. Has this young chirpy young man forgotten that the cost of living is far too unbearable to Ghanaians under Mills than was under any of his predecessors? There could be increase in people's wages but drastic decrease in their real income (what the money can buy). Yes, the NDC appointees like Ablakwah have more money to spend, to purchase party delegates' votes. The fact that those in government and government appointees have illegally acquired gargantuan money to spend does not mean all is well in Ghana.

Yes, President Mills' unprecedented gargantuan achievements among other things are, presiding over politics of insults, a system never known in Ghana body politic. Is he not the first ever President in Ghana that cannot control his Ministers of State but is rather controlled by his Ministers and Deputy Ministers? He is the only President in Ghana to reward those in his camp that are able to insult his political opponents. What a case of "the enemies of my enemies are my friends"

I am not sure Hon Ablakwah is being serious and honest. He is only promoting propaganda thinking Ghanaians are forever stupid. The more Ghanaians swallow the intelligence-underestimation ploys by the NDC, the more stupid we become.

For how long are the NDC going to lie to Ghanaians, just for the fact of remaining in power, as incompetent as they are? President Mills' unprecedented achievements are not positives but mostly negatives.

Court issues warrant for arrest of Xavier Sosu for 'disrespe...
2 minutes ago