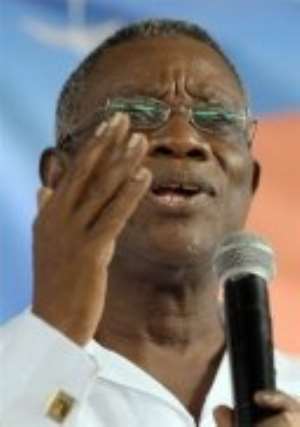 on Wednesday paid a surprise visit to the Agbogbloshie Market in Accra, and commended the traders for their hard work and enormous contribution to the sustenance and growth of the economy.

President Mills said as channels of distribution of goods and services, they make products available to the people and promised government intervention in resolving the problems associated with their operations.

“We know what good work you have done and are doing. The National Democratic Congress (NDC) still cares for you and will support you,” he said, as he talked to hosts of people in the market.

President Mills arrived to a rousing welcome, and went through the nook and cranny of the market. He surged through a milling crowd of thrilled traders who abandoned their wares, either to shake hands with him or to catch a glimpse of him.

He said government still cares for the people and would never abandon them to the conditions in the markets; hence his visit to ascertain at first hand the areas of concern.

He later visited the Yam Market, where he was given another rousing welcome.

President Mills urged the people to register massively to enable them vote the NDC for another four- year term for the government to continue with the projects it had started to better the lives of the citizenry.

One of the concerns of the traders of the market was the news that the land is to be sold out, but Mr Vanderpuije said the facility would move to Adjen Kotoku in the Ga District, where it would be developed into a modern market complex.

Madam Norkor, Acting Queen of the Market, expressed her personal appreciation and that of the traders for the interaction and promised that they would not turn their backs on President Mills come the December polls.

Ms Dzifa Tulasi, another trader also expressed her joy at the visit of the President.

President Mills was later accompanied by Mr Joe Gidisu, Minister of Roads and Highways to inspect progress of work on the Madina- Adenta, and IPS Junction Madina roads.