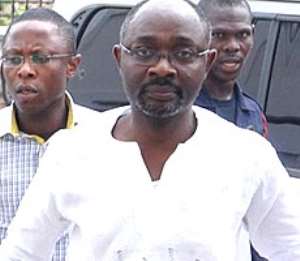 The Forum for Governance and Justice (FGJ) wishes to call on the appropriate State investigative bodies to devote maximum attention to the role of Waterville Holdings (BVI) and its officials as part of the ongoing judgement debt investigations.

We are unable to understand why officials of Waterville, such as Mr. Andrea Orlandi, are walking about freely when documents have emerged clearly suggesting that the company is and has been a major player in what is now called Woyomegate.

The FGJ makes this call based on published documentation suggesting that Waterville agreed with Mr. Woyome to sue the State for damages over alleged abrogation of contract as recently as November 2010. This clearly contradicts the content and spirit of the recent press conference held by Waterville and addressed by Mr. Andrea Orlandi, which sort to suggest his company has had no dealings with Mr. Woyome since 2006.

Documentation seen by FGJ details what seems to be an agreement dated November 26, 2010 with bank accounts, and signed by Mr. Andrea Orlandi for Waterville and Mr. Woyome on his own behalf. The document suggests that Waterville and Woyome negotiated a deal in which Waterville upon receipt of the payment of each €5m instalment of its €25 million claim against the Government of Ghana, will pay Mr. Woyome an amount of €940,000,000.

The questions we wish to ask in light of the above are; why did Mr. Orlandi tell Ghanaians at his March 12, 2012 press conference that Mr. Woyome had no role in the claims Waterville made to the Government of Ghana for reimbursement or compensation against loss? Did Mr. Orlandi forget that he signed an agreement with Mr. Woyome as recently as November 2010? Does Mr. Orlandi think that Ghanaians are stupid? Certainly, Mr. Orlandi and Waterville could not have been truthful to the good people of Ghana; thus, we need to know what else they are hiding.

As the FGJ has stated before, we expect all those who would be found culpable in the Woyome judgment debt matter to be held accountable. We also expect all monies lost to the State as a result of fraud to be retrieved. In this regard, the FGJ calls for Waterville and its officials to be fully investigated in the national interest.