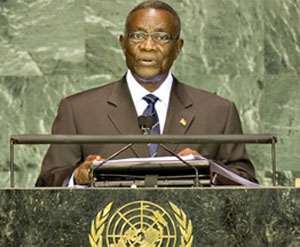 I am going to travel down memory lane today in order to educate the younger generations who were born too late to experience the exploits of our former Heads of State .  If some of us fail to set the record straight while alive, generations yet unborn will not treat us with kid gloves. Indeed, if we fail to let the world know the truth as far as the achievements of our former Heads of State are concerned, the ghosts of Kwame Nkrumah, General Acheampong, Professor Busia, and Dr. Hilla Limann etc will curse us for being ungrateful.  Anytime the president travels outside the country, he deliberately lies through his teeth to his listeners who have never visited Ghana in their life.

I am going to limit myself to three years in office of the following former Heads of State, starting with Osagyefo Dr. Kwame Nkrumah, the first president of Ghana. I am going to put aside the building of school blocks and roads because all our former Heads of State built some. Within three years after coming into power, Dr. Nkrumah's government established the Black Star Line to cart cocoa, timber, manganese, bauxite etc to boost foreign trade. Then he built the Cape Coast University to enhance teacher education. The Osagyefo introduced the State Farms co-operation and the Farmers' Council to help sustain agriculture.  To improve upon the energy sector, the Osagyefo started the construction of the Akosombo Dam, which eventually led to the creation of the largest man-made lake in the world. He went further to plant several species of fish fingerings in the lake. If you have ever eaten 'koobi', thank Nkrumah. Dr. Kwame Nkrumah introduced free education in the Northern and Upper regions because the poverty level in those regions was unbearable. Gentlemen like Dr. Hilla Limann, Alhaji Aliu Mahama and Mr. John Dramani Mahama, who benefited from the free education project rose to become No. 1 and 2 citizens of Ghana.  I can go on and on till your time is wasted. These achievements of the Osagyefo are what can be described as unprecedented .

When the late professor Kofi Abrefa Busia held the reins of power, he set out on a noble plan to open up the rural areas through the construction of feeder roads.  That achievement earned him the accolade 'Kofi Ayi Akwan' (Kofi the road builder). He built secondary schools and clinics across the length and breadth of the country and topped it up with free text books in all the schools in the country, and introduced Experimental Schools on pilot bases, which is now called Junior High School, all within two years. It was Busia who built low-cost houses in all the nine regions in Ghana.  He too continued with fee-free education and further supplied free 'Achimota' sandals to pupils in middle schools. If you look at these achievements and somebody tells you that they are unprecedented achievements, look at his face and tell him he is a pathological liar like the devil.

Of all the military usurpers of power in Ghana, General Ignatius Kutu Acheampong stood tall. The General was the only Head of State who refused to contract foreign loans when he was in power. All the numerous projects he executed were done with local resources.  Even though he purchased a presidential jet, he never travelled in it. In fact, for the seven years that he ruled the nation, he travelled only once outside the country. He went to Togo by land and returned the same day by land. General Acheampong introduced the Operation Feed Yourself programme which led to an unprecedented bumper harvest of food crops and fishes, all within three years.  Fishermen along the coast line caught so much fishes that for lack of storage they were forced to return back to sea to jettison their catch.

The defunct Tiger Pito factory sited at Bolgatanga was a trademark of the General's achievement for the people of Upper Region who liked the snuff so much.

General Acheampong established Regional Development Co-operations in all the nine regions in the country to provide various services to the people. Ghanaians were driving left like their counterparts in Britain. It was General Acheampong who introduced right hand driving that you are experiencing today. The fears that the introduction of driving right will cause many accidents were allayed through vigorous campaigns which sunk in. More than eight coups were launched against General Acheampong but all those arrested in connection with the coup were not executed.  Even those who were convicted and jailed were released from jail after serving a few months in jail.  Ironically, General Acheampong was tied to the stake and shot like a common criminal without trial when Rawlings seized power from the SMC II. I am not going to add Rawlings to the list because his situation was unique.  Immediately he seized power in 1981, the nation experienced great tribulation. The massive bushfire which gutted down everything including cocoa farms led to famine, which nearly brought the country on her knees.  If he could not achieve anything within the preceding three years it was due to this Armageddon-like catastrophe.

Like professor Busia, Dr. Hilla Limann's four-year tenure of office was terminated through a coup led by J.J Rawlings.  Before Limann was elected as the president of Ghana, Rawlings had launched a bloody coup, killing three former Heads of State and some top military officers. All goods were sold away at giveaway prices, leaving empty shelves and broken businessmen and women. Common toothpaste was so scarce that Ghanaians resorted to the use of Nsawkaw chewing stick. Immediately he was sworn in as the executive president of Ghana, the French scholar introduced the Trade Liberalization Policy which led to the flooding of the market with an assortment of foreign goods. Before we could blink an eye, the long queues at the stores went away with the wind.  Petroleum products were so scarce that drivers left their vehicles at fuel dumps for weeks in anticipation of getting at least one gallon of petrol to drive home.  In less than two months, the then Minister of Fuel and Power, Professor George Benneh,   brought in enough petroleum products to solve the problem.

By the time Limann took over power, the Black Star Line could boast of 16 ships.  One year after taking over power, Dr. Limann contracted the STX in South Korea to build four more brand new cargo ships for the Black Star Line. It was Dr. Limann who introduced Tata Buses into the system. The then Minister of Transport, Harry Sawyer, was the one who went to India to negotiate the deal. Rice farmers in the Northern region will never forget Dr. Limann for introducing the irrigation system which led to bumper harvest of rice to support the economy.  All these and many more were done in a matter of two years.  And Limann never told Ghanaians that he chalked an enviable achievement.

President Kufuor is one person who never touted his achievements even though he had enough to tell. The criminal Libel Law which was introduced by the (P)NDC and which cowed journalists and the good people of Ghana into quietude was quickly repealed immediately he resumed office. The repeal of that useless law opened the floodgate for Ghanaians to say or write whatever they like without any fear.  Even when that herbalist who calls himself Dr. Asemfoforo insulted the president at Sunyani during the Peoples' Assembly, Mr. Kufuor asked his supporters not to touch him because that was the price to pay when you want democracy to prevail in a country like ours. In less than four years in office, the Kufuor administration introduced the National Health Insurance Scheme to cancel the killer Cash and Carry system of health delivery.

Before the NPP came to power, parents were made to buy chairs for their wards who attended school. In a matter of two years after coming to power, the Kufuor administration made sure all public schools in the country were provided with dual desks. He went further to bring on board the Capitation Grant to assuage the suffering of poor parents. By the time Kufuor took over the reins of power, the prices of petroleum products had reached an all time record high. In fact, the price of crude oil had skyrocketed in the world market and commuters were finding it difficult to travel to and from their places of work. It was the NPP administration which introduced the Metro Mass Transit, popularly known as the Kufuor Bus, into the system. But for the introduction of the MMT workers in Ghana would have suffered a great deal.

So you see, my cherished reader, if we are talking of unprecedented achievements, Mills has absolutely nothing to show.  Oh yes, let any NDC member put his hand in the fire and show me one single new innovation that the NDC administration has done in the three years that the Mills/ Mahama administration has been in power .  As for me, if there is any 'unprecedented achievement' by this administration, it is the Woyomegate.  For the first time in the political history of this country, government officials and civil servants colluded with one person to commit a 'gargantuan crime' which led to the resignation of a former Minister of Justice and Attorney General and the firing of yet another Minister of Justice and Attorney General. That to me is an 'unprecedented achievement' because as the sages say, no matter how much you dislike the pig, you need to give it credit for its prowess in love making. My pen cannot write again.