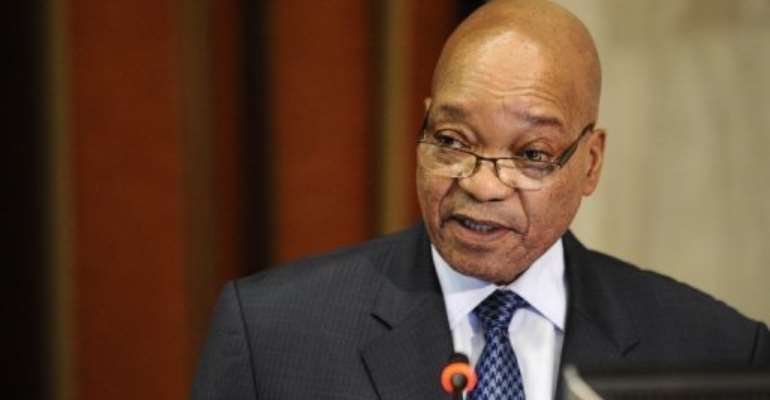 Zuma has made the fight against corruption a priority of his government. By Stephane de Sakutin (AFP/File)

CAPE TOWN (AFP) - South African appeals judges cleared the way Tuesday for a court challenge of the state's decision three years ago to drop graft charges against President Jacob Zuma on the eve of taking office.

The Supreme Court of Appeal in the central city of Bloemfontein ruled that the prosecuting authority's decision to drop the case may be reviewed by a court, granting an application by the main opposition Democratic Alliance (DA).

The party has denounced the state ending its long-running probe of Zuma, involving claims of corruption in a multi-billion dollar arms deal that blemished South Africa's young democracy.

The appeals judges said a review was in the public interest and emphasised that the exercise of public power remained subject to judicial review.

"It means that none of us is above the law," the ruling stated.

"It is a concept that we, as a nation, must cherish, nurture and protect. We must be intent on ensuring that it is ingrained in the national psyche. It is our best guarantee against tyranny, now and in the future."

The judges also ruled that a hitherto undisclosed portion of the documents backing up the prosecution decision must be made public.

The ruling will lift the lid on the reasons for prosecutors dropping their investigation into Zuma for fraud, racketeering, embezzlement and money laundering just weeks before his African National Congress swept polls and put him in office.

The prosecutions boss at the time cited an alleged bid by the head of an elite investigative unit to use the case for political gain at a time of an intense power tussle in the ruling African National Congress.

He said this had tainted the legal process against Zuma, which had dragged on for some eight years.

Zuma's former financial advisor was jailed for fraud in 2005 and a judge found "overwhelming evidence" that a corrupt relationship between him and the politician.

This led to Zuma being fired as the country's deputy president in 2005, though later attempts to charge him were unsuccessful.

Zuma has made the fight against corruption a priority of his government. Last year he sacked two ministers, suspended the police chief and named a panel to probe the arms deal.

DA leader Helen Zille Tuesday vowed to challenge the withdrawal of the charges and said the judgment was a "victory for our constitutional democracy".

"We have now secured the foundation from which to challenge the (prosecution) decision in the North Gauteng High Court," she said in a statement.

"We know that this is the first step on a long journey."

Zuma's office said it had noted the ruling, but pointed out the court had not actually reversed the decision to drop the charges.

The case Tuesday did not concern the merits of the decision, but referred to technical legal issues, it said.

"We wish to emphasise that the decision taken by the acting national director of public prosecution on April 6, 2009, not to prosecute President Jacob Zuma, stands," a statement said.

"The full judgement is currently being studied by the president's legal team, to ascertain its implications."

He is running this year for another term as ANC leader in party elections, where he will have to battle rising internal tensions. The ANC enjoys widespread voter support, so success virtually guarantees him another term as president.

The DA argued that the prosecution decision had been made on political grounds, paving the way for Zuma to become the country's leader.

The party took legal action after the prosecutions authority denied a request to make its full decision public. It turned to the appeals court after losing its bid in lower court.