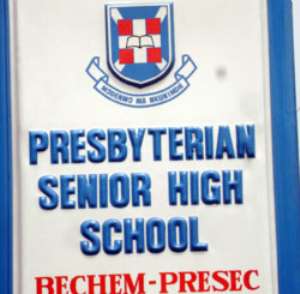 A 15-year-old student at Bechem Presbyterian Senior High School (Bechem Presec) in the Tano South District of the Brong Ahafo Region has allegedly been raped by seven of her fellow students.

The seven men, between the ages of 18 and 20, reportedly laced the girl's drink with an undisclosed drug that put her to sleep before they unleashed their libido on her one after the other.

The first year female student was found in a guest house unconscious and was resuscitated by a team of medical personnel at Techimantia Hospital after some of her teachers saw her almost dead and rushed her to the hospital.

Hospital sources told  DAILY GUIDE  that the girl was given several drips of transfusion in an attempt to revive her and she spent a number of days in the hospital.

Doctors have directed the school authorities to bring the victim back to the hospital in a month's time for her to take an HIV/AIDS and pregnancy tests.

The incident occurred on February 24, 2012 at a guest house during an Inter-School Zonal Sports competition held at Techimantia, near Bechem.

The Bechem District Police Commander, DSP Emmanuel Baah, who confirmed the incident to  DAILY GUIDE , said the defilement was reported to the police three days after the incident had occurred.

DSP Baah said seven students of Presec connected to the crime were immediately arrested and kept in police custody but were released on bail the following day.

He said investigations were ongoing.
According to Mr Baah, because the girl was drugged, she could not identify the particular boys who defiled her.

He however said the victim was able to tell that the drink was bought for her by the seven suspects who were the last people she was with before the incident happened.

Meanwhile, the school authorities have been accused by some residents in the town for trying to shield the boys from facing justice.

Some of the teachers in the school also expressed their disgust at the manner in which the issue was being handled as the staff had not been officially told about the incident.

The school authorities have refused to grant audience to DAILY GUIDE.

Since  DAILY GUIDE  got wind of the incident about two weeks ago, it has been to the school twice to get an official position of the incident, but all to no avail as the headmaster was said to have travelled all the time.

His two deputies have also declined to make any comment on the incident.

Attempts to get the headmaster's number to contact him on phone also proved unsuccessful.

The Tano South District Director of Education, Mary Gyimah, confirmed the alleged gang-rape in an interview with DAILY GUIDE .

She said that the headmaster informed her about the incident and she directed him to submit a full report on it to her outfit.

Madam Gyimah said the headmaster was yet to submit the said report to her office.

DAILY GUIDE 's investigations have established that the school authorities are yet to take any action against the suspects.

They have not even summoned the students before the school's disciplinary committee.

The victim, this paper learnt, has reported back to school.

DAILY GUIDE  learnt that she has been going through serious mental trauma and is being stigmatised.

Meanwhile, some of the girls in the school who spoke to DAILY GUIDE under anonymity said they longer felt secure in the school because the school authorities were not prepared to come to their defence in case they were in trouble.

According to the aggrieved girls, what had happened to their colleague and the school authorities' indifference in fighting the case to get those boys punished were ample evidence to their assertions.