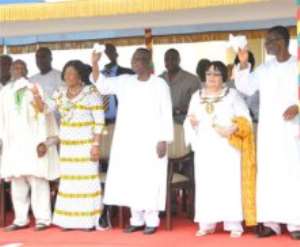 An interdenominational national prayer and thanksgiving service was held Sunday at the Independence Square in Accra to climax activities marking the 55th Independence anniversary, with a call on all eligible voters to register during the biometric registration exercise.

Making the call at the service, President John Evans Atta Mills said it was crucial for Ghanaians to participate in the registration to enable them to exercise their franchise in the forthcoming December elections.

The well-patronised ceremony, on the theme:â€ˆ“Peace, security and stability within your borders, oh Ghana”, was graced by government appointees, ministers of state, Members of Parliament, members of the Diplomatic Corps, the clergy, traditional leaders and a cross-section of the public.

The service was interspersed with worship and praise ministration and Bible readings.

President Mills said the desire of everyone was for peace and security to be maintained before, during and after the elections, stressing, “It is only God who has the seal of approval for our efforts and for that reason let us be grateful to Him.”

Commenting on the sermon, he said, “The Good Lord has blessed us with this brilliant sermon; our responsibility is to meditate. The message has fallen on good soil.”

Preaching the sermon earlier, the President of the Ghana Pentecostal and Charismatic Council, Apostle Dr Opoku Onyinah, urged Ghanaians to be agents of peace during and after the elections.

He condemned the use of vengeance and violence to destroy innocent lives, particularly women and children, stressing, “Let us not use evil minds to achieve our goals.”

Prayers were said for peaceful elections and justice in the country, national security and stability, national welfare, development and progress, the various arms of government and revival and national transformation.

Similar thanksgiving services were held in the regional capitals.

The Anglican Bishop of Ho, the Rt Rev Mathias Medadues-Badohu, at a sermon at Jubilee Park, observed that prayer alone could not guarantee the peace, unity and stability of the country.

According to him, a clear sense of civic responsibility on the part of all the citizenry, coupled with total dependence on God, was the only key to ensuring national unity and stability.

He identified some causes of violence as unbalanced economic power which predisposed the majority poor to exploitation by the few rich and powerful.

Rt Rev Medadues-Badohu advised against discrimination on the basis of social status, saying the nation must have a level playing field for all to realise their potential for the betterment of the country.

For his part, the Deputy Volta Regional Minister, Mr Henry Ametefee, charged the body of Christ to pray without ceasing and called on church leaders to preach peace.

In the Eastern Regional capital of Koforidua, leaders and members of various churches in the municipality congregated at the Jackson’s Park to worship and pray for the nation.

They were addressed by the outgoing Eastern Regional Minister, Dr Kwasi Apea-Kubi, who admonished Ghanaians to be thankful to God for the peace and security being enjoyed in the country.

In his view, while other countries were battling with drought and famine, Ghanaians had had adequate rainfall and sufficient food to sustain themselves.

He reminded Ghanaians to be mindful of the freedom of speech prevailing in Ghana and refrain from acts that could undermine democratic tenets.

Preaching the sermon, the Founder of the Church of Rock Ministries, Rev Stephen Appiah, advised Ghanaians not to take the peace and stability in the country for granted but do their best to protect and preserve it.

“If we want peace, our attitude, language and actions must reflect peace. We must behave as a cultured people who have been taught how to speak the truth and be discerning to avoid bad influence from politicians,” he admonished.

The regional thanksgiving service for the Central region was held at the Christ Church Anglican Cathedral in Cape Coast.

It was attended by public officials, including the Central Regional Minister, Mrs Ama Benyiwa Doe; her deputy, Mr Thomas Tawiah Quansah, and the Member of Parliament for Cape Coast, Mr Ebow Barton Odro.

Also in attendance were heads of departments and religious leaders.

The congregation thanked God for the peace Ghana was enjoying and asked for peace before, during and after the 2012 general election.

Preaching the sermon, the Anglican Bishop of Cape Coast, Rt Rev Daniel Allotey, said Ghanaians must remember that the Lord had been merciful and gracious to us as a nation and give Him thanks.

He stated that it behoved all to make conscious efforts to preserve the peace that the country enjoyed, adding that it was something that should be protected.

Mrs Doe said all must eschew insulting language and acrimonious behaviour and strive to ensure that peace prevailed even after the elections.