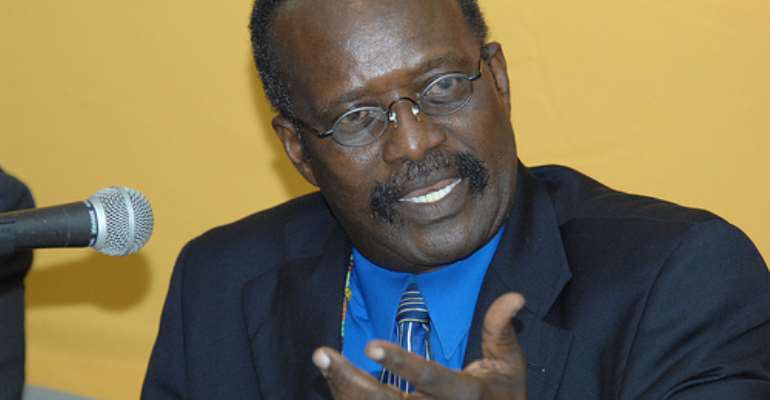 Accra, March 20, GNA - The Minister of Food and Agriculture, Mr Kwesi Ahwoi on Monday said making agriculture attractive to the youth, through modernisation remained a top priority of the Government.

"As part of our efforts to achieve this, government is setting up Agricultural Mechanisation Centers to help young farmers without capital, who might need expensive tools such as tractors, which they may not be able to afford," he said.

Mr Ahwoi made the observation in an address read on his behalf by Dr Sam Dapaah, Chief Technical Advisor at the Ministry, at the opening session of an International Conference on Young People in Food and Farming in Africa, in Accra.

The three-day conference on the theme; "Young People, Farming and Food: The Future of the Agrifood Sector in Africa," is convened by the Future Agricultures Consortium and Institute of Statistical, Social and Economic Research, (ISSER) University of Ghana, Legon.

Mr Ahwoi said agriculture had been included in the export development fund, which made it possible for farmers to take loans at a repayment rate of 12 per cent interest, "instead of the usual 20 to 25 per cent interest".

"The Ghanaian youth are interested in agriculture. The Government is working towards making the agricultural sector attractive to more people, especially the young ones," he said.

Mr Ahwoi said "we are linking raw material production to adding value. Over 250 products could be derived from cassava. Once other uses are found for crops, their demand is increased and cultivation becomes more profitable".

Dr Namanga Ngogi, President of Alliance for a Green Revolution in Africa (AGRA), said with 60 per cent of Africa's population residing in rural areas and the large majority made up of youth, the poor participation of young people in farming "directly threatens the future of agriculture and rural economic transformation on the continent".

He said agriculture, given its major role in the rural economy, had the potential to provide solutions to the current problems of youth unemployment on the continent and slow the pace of rural-urban migration.

"There is no doubt that the power of young people in Africa's agriculture can be unleashed if the institutional structures and policy instruments are put in place to provide the necessary training and access to finance and mentoring, that could help influence their visions of agriculture as an economic activity, with potential to assure viable incomes and good quality of life," he said.

Dr Ngogi said there was the need to challenge African Governments to develop a Youth in Agriculture Programme that would see one million young people, access 10 million hectares of land in the next 10 years.

"With access to finance for the purchase of needed inputs and access to water management skills, basic motorised land preparation equipment and structured markets, one million young people producing four metric tonnes of grain equivalent per hectare, would produce 40 million metric tonnes of food, and feed 200 million Africans per year."

Dr Ngogi said the programme could not cost more than 20 billion dollars in 10 years adding, "such a continental programme will generate millions of on-farm and off farm jobs in the service sector, transportation and processing, and transform Africa from a net food importing region to a major food exporter. Is this too much to ask our leaders?"

Reverend Dr Sam Asuming Brempong, Department of Agriculture and Economic and Agribusiness, University of Ghana-Legon, said policy makers and development partners had developed great interest in the involvement of young people in the agricultural sector, adding that this had mainly led to the holding of the conference.

He said some of the limitations in achieving a vibrant agricultural sector, were a large scale involvement of the youth, lack of policy advocates and researchers who were well informed, a weak base of empirical research and lack of adequate stimulus for the pursuit of progressive policies within the agricultural sector.

"Agriculture is the biggest contributor in most African countries. We hope this conference will mark the beginning of new policies that will engage our young people in agriculture as has never happened before, "he said.