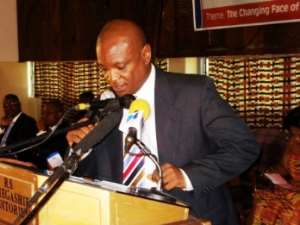 The yearly award is one of three, all commencing next academic year, announced at the Polytechnic's 12th Congregation in Ho on Saturday.

Togbe Afede said the offer was to motivate and induce lecturers to do their best in the face of Dr Victor Jakpasu Afun, the Rector's complaint, that the institution was finding it hard to attract, recruit and retain academic staff.

The third award was instituted by Mr Prince Kofi Kludjeson, an Industrialist for the best student in accountancy.

A total of 1,244 students who completed their courses in 2011 graduated with degrees and diplomas, 17 of them attaining first class.

Mr Lee Ocran, the Minister of Education, addressed the congregation on behalf of Vice-President John Mahama, and acknowledged the importance of polytechnic education and promised to continue to promote technical education in the country.

Professor Anthony Adimado, Chairman of the Council of the Polytechnic, said the Polytechnic was progressing steadily, adding new courses in auto-engineering, agricultural engineering and hospitality and tourism management.

Mr Lee Ocran later toured some uncompleted projects at the Polytechnic including its workshop that is said to hold ageing equipment and ”incubatory” facilities of the University of Health and Allied Sciences in preparation to begin admissions this year.