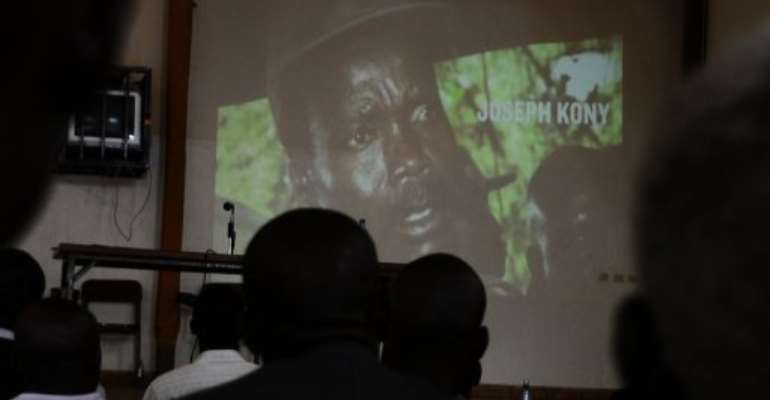 Tens of millions of people worldwide have viewed the Kony2012 film. By Isaac Kasamani (AFP)

GULU, Uganda (AFP) - Standing outside a school hall in Gulu, the northern Ugandan town that suffered most from Lord's Resistance Army rebels, Otto Santonino tries to explain the impact of the film he has just watched.

"It brings back such bad memories of all the terrible things that happened to us during the war," said Santonino, a 79-year old former parish chief, pointing at where he left arm should be.

Santonino says he lost his arm over 20 years ago when he was caught and tortured by Ugandan government troops as they battled the fearsome LRA guerrillas and their leader Joseph Kony in a brutal civil war.

Now -- six years after the war ended in northern Uganda when Kony left the country for neighbouring nations -- a film calling for warlord's capture has become an internet sensation and reawakened bitter memories in the areas most afflicted by the conflict.

Since it was released two weeks ago, tens of millions of people worldwide have viewed the Kony2012 film, which was produced by US-based advocacy group Invisible Children.

But while Gulu was at the epicentre of the two-decade conflict in northern Uganda -- and features heavily in the video -- few people here have seen the film due to limited internet access.

That was why Santonino, along with around 150 other cultural and political leaders from the Acholi ethnic group -- the group Kony belongs to -- organised a screening of the film over the weekend.

Local representatives from Invisible Children were invited to discuss the video, but the film has already drawn ire from some in northern Uganda.

"We thought there should have been an outreach programme for that video here before they showed it to the rest of the world -- they should have launched it here," said Peter Okello, Gulu district speaker and one of the event organisers.

A local youth group was forced to stop showing the film last week after residents in the town of Lira reacted angrily to the video's perceived over-simplifications during an outdoor screening.

While most people at the screening in Gulu praised Invisible Children for the work they do rebuilding schools and providing scholarships in northern Uganda, some at the event reiterated concerns about the film.

"The video does not reflect the real situation on the ground in northern Uganda," said Patrick Luom, a programme officer for the Acholi Religious Leaders Peace Initiative, an influential local multi-faith group.

"It stirs up difficult memories of the old situation here and mentions little about the fact that the LRA is now in Central African Republic, Democratic Republic of Congo and South Sudan," Luom added.

The LRA is infamous for mutilating its victims and abducting children to use a soldiers and sex-slaves.

Luom said that many in northern Uganda would find the film one-sided, as it failed to mention atrocities committed by other sides in the conflict - including the government troops.

"It ignored crimes committed by other parties...the crimes in northern Uganda were not just committed by the LRA," Luom said.

Invisible Children has been stung by criticism from those in northern Uganda but some of those that featured in the film said that the fundamental message was correct.

Jacob Acaye, a former LRA abductee who features in the film as a young boy, told AFP that while Kony may no longer be in northern Uganda, he was still committing atrocities in neighboring countries and had to be halted.

"He needs to be stopped no matter what - that is what the campaign is about," said Acaye, now a law student in Kampala.

Norbert Mao, a leading Ugandan opposition politician from the region who was also interviewed in the film, said that the film makers had to simplify the issue to make it appeal to a global audience.

"These kids in America are not so sophisticated so please don't electrocute (criticise them) with your philosophical debates," Mao told the Acholi leaders.

As for Santonino, the local chief who lost his arm during the war, like several leaders at the meeting, he said he doubted that the purely military strategy demanded by Invisible Children could help end the LRA threat - even though Kony has previously failed to sign numerous peace deals.

"I believe in peace talks, and that they are the only way that Kony will come out - we have seen too many military efforts fail and they will not be successful again," he said.