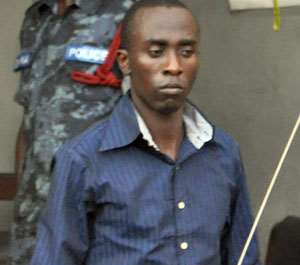 Embattled Operations Director of the Friends of Nana Konadu Agyeman-Rawlings (FONKAR), Ernest Owusu-Bempah, finally gained temporary freedom yesterday after spending more than the constitutionally allowed 48 hours for a suspect to be detained without charge.

This was after being kept in the custody of the Bureau of National Investigations for two days running.

After several back and forth movements, he was granted a police enquiry bail in the sum of GH¢50,000 and three sureties.

He has been asked to report on Monday.
The FONKAR capo was charged with causing false publication with the intent to cause panic and fear.

The usual jubilation that had often characterised the release of detainees like him was absent. Owusu-Bempah was arrested and detained on Wednesday for alleging that First Lady Ernestina Naadu Mills had $5million from the infamous Woyome scandal in which self-acclaimed financier of the governing National Democratic Congress (NDC), Alfred Agbesi Woyome, was paid over GH¢51.2million as judgment debt.

Prior to his release yesterday, the leadership of FONKAR issued a statement on Thursday night after a crisis meeting with the matriarch of the group, Nana Konadu Agyeman-Rawlings in which they expressed disgust at the treatment meted out to their colleague by law enforcement agencies.

The statement, which was signed by Alhaji Mohammed Naziru, Charles Opoku and Clement Gudah, noted, 'We are aware that the investigators have completed questioning him. What we are not aware of is why he is still being held captive by the security services with a so-called vague charge of misdemeanour and false publication.'

They stressed the belief that Owusu-Bempah's arrest was ordered by the presidency since they claimed to have stumbled on credible information which revealed that 'Ernest Owusu-Bempah should have been released long ago but for orders from the presidency demanding his continuous incarceration for the purpose of teaching him a lesson'.

'We have also been told that he is being put through physical and psychological torture in the hands of the security agencies- a situation that all well-meaning Ghanaians must condemn in no uncertain terms,' the statement said.

The group stated that it was appalled by the continued silence of the presidency on the issue, indicating, 'Unless the presidency has a hand in his torture and continued incarceration, we do not understand why there has not been a presidential order for his immediate release just like it happened to the NPP activist, Nana Darkwa, who accused the NDC founder and former President, Jerry John Rawlings of burning his own residence in 2010.

'If the presidency were genuine and consistent, similar action would have taken place in this situation, especially considering that Ernest Owusu-Bempah is also a citizen of this country and an NDC member,' they noted, calling on human rights organizations to rise up and speak against the gross violations of the rights of a lawful citizen of Ghana.

Owusu-Bempah went to the BNI headquarters on Wednesday in the company of his lawyers and some FONKAR executives following a verbal invitation extended to him by the Director of BNI, Yaw Donkor.

He was later sent to the headquarters of the Criminal Investigations Department (CID) of the Ghana Police Service where, after interrogation and a statement taken from him, he was detained and later transferred to the BNI.

He was then denied access to the outside world including his lawyers.

The Konadu boy resolved to embark on a hunger strike in protest against his arrest.

His lawyers, led by Kofi Dua-Adonteng, decided to file a 'habeas corpus' (produce the body) in court to enable them to have access to their client.

Even before any such thing could be served on either the police or the BNI, the tough-talking FONKAR chief was granted bail.