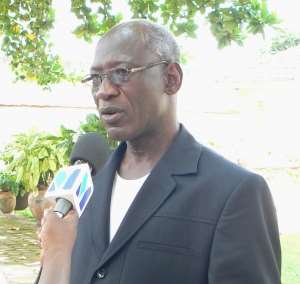 Kukobilla (N/R), March 15, GNA – The Savannah Accelerated Development Authority (SADA) in its bid to improve the standard of living in the savanna belts of the country is attracting more investors including the Mino Weir and Willis (MWW) group of companies, one of the largest U,K suppliers of exotic and fresh fruits, for accelerated development.

The company has already supplied seeds for the production of butter nut squash in a 15-acre parcel of land at Kukobilla on a pilot basis and intends to partner local farmers for large scale production of the nut for export into European markets.

Mr. Gilbert Iddi, Chief Executive Officer of SADA revealed this during a visit to the Kukubilla field and the Upper East Region with a team from MWW and some other experts to ascertain how well the crop was fairing.

He assured the MWW team that the savannah belt of the country had the best vegetation with arable land for the cultivation of the butter nut squash to meet their demand, saying that the farmers could only do that when they were assured of a ready market for their produce.

Mr. Iddi said agriculture was the main stay of the people of the savanna belt and SADA was equally determined to use agriculture to change the economic fortunes of the area's residents through a market-led-outgrower production, stressing that the quality and standard would be determined by market forces.

He explained that SADA was not going to be implementer of projects but will coordinate activities of development agencies such as the Export Development and Investment Fund (EDIF), Northern Rural Growth Programme (NRGP) while partnering with the Ministry of Food and Agriculture (MOFA).

He said MOFA would be the kingpin of the SADA activities, adding that some commercial farmers would be identified who will in turn liaise with outgrower farmers to improve their financial conditions.

Mr. Francisco Stargardter, Managing Director of Oxford Fruit Company Ltd, a subsidiary of the MWW, indicated that the butter nut squash was a high demanding vegetable in European countries and they were ready to buy larger quantities for export.

He said they had already been doing a variety of businesses in the country for the past years and described the Northern Regions as the ideal climate for the cultivation of butter nut. He gave the assurance that when farmers bought into the cultivation of the crop, their financial fortunes would change.

Mr. Davis Korbe, the 2009 National Best Farmer who was also among the delegation testified that MWW was a credible investor to do business with but expressed worry that the poor irrigation system in the Northern part of the country could derailed the objective of the project.

When the team got to the Upper East Region, the Regional Minister Mr. Mark Woyongo deplored the poor irrigation system in the area saying that although the region had a number of good irrigation dams like the Tono and Via dams, those dams were silted and needed to be de-silted for their full utilization.

He said farmers in the region had good knowledge in the production of variety of vegetable crops and were ready to produce any type of vegetables once they had access to ready markets.