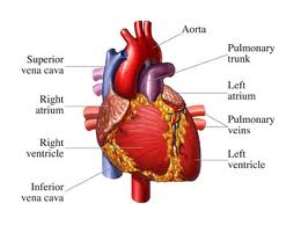 Hohoe, March15 GNA-Urbanization is negatively impacting the health of children and increasing their risk of contracting cardiovascular disease (CVD) including heart disease and stroke, a new report published this week by the World Heart Federation, reveals.

“A misconception that CVD is a lifestyle disease that primarily afflicts older, affluent populations has until now led to the virtual absence of vital investment in the prevention and treatment of CVD and other non-communicable diseases (NCDs).”

He said “Action to address urban health risks is therefore essential, to protect the health of our children and the prospects of future generations.”

Because the risk of CVD can be mitigated by changes to behaviour, there is a widespread perception that CVD is a “lifestyle” disease.

However, many of the challenges posed by urban environments cannot be addressed simply through individual lifestyle choices. For most of the world's people, and especially its children, where a person lives intrinsically affects their health and life options, the research declared.

Around 50 per cent of the world's population lives in an urban environment and this is generally increasing. Within the Gulf region the percentage of urban population is significantly higher.

For example, the urban population in the UAE is 78 per cent, in Jordan it is 79 per cent and in Saudi Arabia the urban dwellers represent 84 per cent of the nation's population. Meanwhile, Qatar has one of the highest percentage urban populations in the world at 96 per cent according to a 2007-2010 World Bank report.

“Without a doubt urbanization has an important impact on health and particularly on that of children. The link between urbanization and heart health has been clearly established and as urban development across the region continues, steps must be taken to protect the health of our children,” said Dr Nooshin Bazargani, Head of CVD prevention group of Emirates Cardiac Society.

He said, “Sustainable development in our cities and taking a multi-stakeholder approach to addressing the growing CVD burden is key”.

The World Congress of Cardiology, which is schedule to take place in Dubai in April, will provide an important opportunity to focus the attention of this region on what must be done to protect our future.

The World Heart Federation offers an international stage for the latest developments in science and public outreach in the field of cardiovascular health.

It will place emphasis on the complementary nature of science and public outreach and strives to spread the message that through individual, community and patient-care interventions, the growing epidemic of cardiovascular diseases can be prevented.

The majority of deaths due to CVD are precipitated by risk factors such as high blood pressure, high cholesterol, obesity, or the presence of diabetes, which can, to a large extent, be prevented or controlled through the consumption of a healthy diet, regular exercise and avoiding tobacco.

The rise of CVD in LMICs has therefore been linked to progressive urbanization and the coinciding “globalization of unhealthy lifestyles, which are facilitated by urban life – tobacco use, unhealthy diets, physical inactivity and harmful use of alcohol”, said a WHO and UNHABITAT 2010 report.