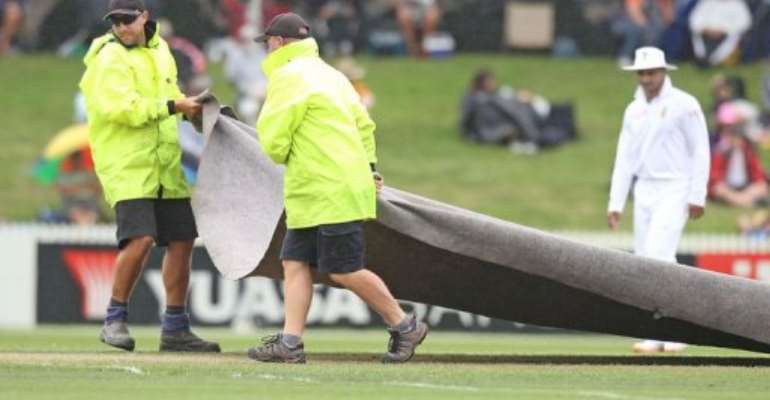 Rain frustrated N.Zealand's recovery from losing early wickets in the opening day of the second Test against S.Africa. By Marty Melville (AFP)

Officials called an early tea break after the covers came out mid-way through the second session, with Brendon McCullum unbeaten on 38 alongside skipper Ross Taylor 29 not out, as the home side reached 94 for two.

Before the interruption, which cost about 75 minutes of playing time, McCullum and Taylor were looking comfortable on a pitch that offered early movement to the South African attack but flattened out through the day.

Proteas skipper Graeme Smith's decision to send New Zealand in to bat on a green-tinged wicket after winning the toss paid immediate dividends as New Zealand openers Rob Nicol and Martin Guptill were dismissed before lunch.

Paceman Vernon Philander made an early breakthrough, dismissing Nicol for two in the sixth over as the opener's woes against the Proteas continued.

Nicol, who posted disappointing figures of six and 19 on debut in the first Test, misjudged as he chased a wide delivery only to edge to Mark Boucher behind the stumps.

Guptill then grafted a 33-run partnership with Brendon McCullum before giving his wicket away cheaply on 22, dragging a Dale Steyn delivery onto his stumps just as he appeared to be settling in.

It was again left to McCullum and Taylor, who anchored both of New Zealand's innings in the first Test with partnerships of 65 and 82, to steady the Black Caps.

The pair combined for 50 runs on a wicket that looked relatively timid compared to the opening overs, punishing some loose bowling from Vernon Philander before the weather intervened.

South Africa, second in the world Test rankings, are keen to assert their dominance over eighth-ranked New Zealand after the first Test in Dunedin ended in a draw when the final day's play was washed out.

The Proteas are also seeking revenge after the draw cost them the chance of a 3-0 clean sweep in the series that would have seen them topple England from the number one Test ranking.

The tourists' starting side was unchanged from the first Test, while New Zealand's selectors revamped their attack in a bid to increase the chances of taking 20 wickets against the Proteas' formidable batting line-up.

Pacemen Tim Southee and Trent Boult were dropped in favour of Brent Arnel and Mark Gillespie, who is returning to the Test side for the first time in more than three years.