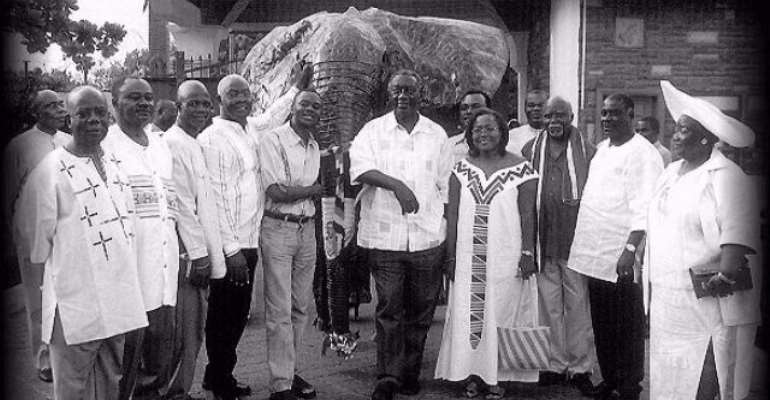 Ho, July 30, GNA - Mr Kwame Attah, the suspended Volta Regional Secretary of the New Patriotic Party (NPP) and four others were on Wednesday arrested for allegedly planting three explosive devices on the premises of the Regional Organiser of the party, Mr Johnson Avuletey. The others are Robert Anani, Mawufemor Boadu, Geoffrey Mensah and Francis Mawunyo Awi, all members of the Anyadi faction of the Ho Central Constituency Executives.

Mr John K. Yali, Deputy Volta Regional Police Commander, told the Ghana News Agency on Wednesday that the suspects were being kept at the Anyirawase Police cells because of congestion at the Ho Police Station.

He said the suspects would be put before court as soon as investigations were completed.

On Monday Mr Avuletey reported an explosion on the premises of his bungalow, near the Kabore School complex in Ho.

The Police described the devices as "Molotov Cocktail" a kind of petrol bomb used during the Russian revolution. PIC: President Kufuor With Members of the Volta Region NPP