President Mills' trip to US yields multiple billions for development 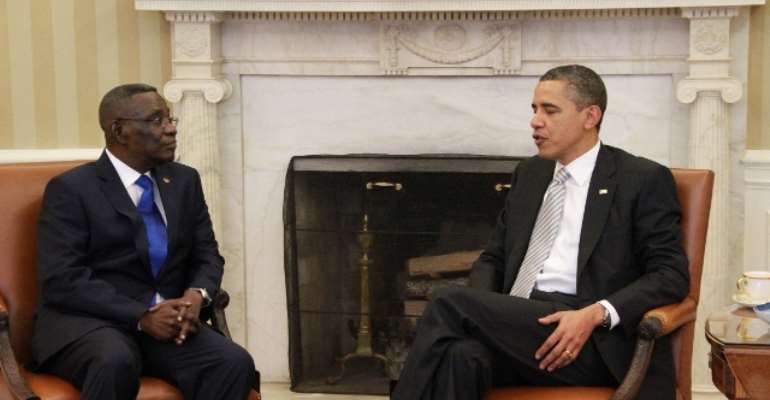 Washington DC, March 13, GNA- The official visit of President John Atta Mills to the United States of America has yielded not less than 1.2 billion dollars to help boost the Ghanaian economy and improve social infrastructure.

There were also other pledges and commitments by the United States Government towards the development of other sectors of the economy.

The 1.2 billion dollars would arrive from three memoranda of understanding Ghana signed with General Electric Company for a 200 million dollars agreement in which Fairfield, a Connecticut-based company, will rebuild part of the country's western rail lines that needs one billion dollars to be fully rebuilt; Conti Group for 590 million dollars for the Accra Drains Re-designing Project.

The rest would be used to support the development of infrastructure under President Obama's Partnehsip for Growth programme with Ghana, for which Ghana's Ministers for Trade, Finance and Energy, and their American counterparts signed the Statement of Principles which would guide the flow of the funds.

Additionally, KOSMOS Eneygy is to inject about 1.2 billion dollars into the Jubilee oil development.

Speaking with journalists on his his impression with President Mills' visit, Mr Daniel Ohene Agyekum, Ghana's ambassador to the US said the President's visit has reinforced the determination of Ghana to work with American business people "so that trade and investment continues to flow for our mutual benefit."

President Mills has at the invitation of US President Barack Obama, been in the US since last week for an official visit, in reciprocity of President Obama's visit to Ghana in July 2009.

The US President's visit, based on Ghana's commitment to democratic governance, launched President Obama's entry into Africa, after his election in 2008.

Mr Agyekum said prior to the visit a number of things were done by the embassy in furtherance of the mission of the Embassy to create and promote investment with partner nations.

He said based on research findings of the Trade Section, the Embassy conducted investment outreach programmes in the various States to correct and erase the impression that Africa was unstable and unsuitable for business.

Mr Agyekum expressed appreciation to the US Government for accepting to increase investment and partnership for development in Ghana.

Recounting the United States and Ghana's shared values of democracy, rule of law, openness, and the respect of human rights, Mr Agyekum said, "the special preferential treatment is because of what Ghana has achieved which others have not been able to achieve."