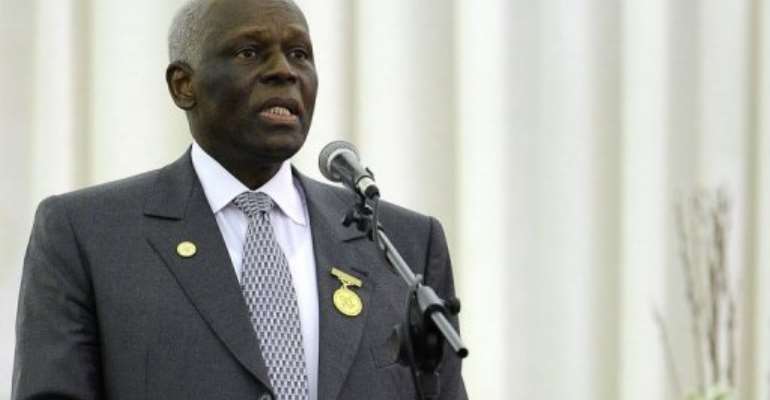 President Jose Eduardo dos Santos (pictured) was shown in the montage as a thief in a police line-up. By Stephane de Sakutin (AFP/File)

About 15 officers from the National Directorate of Criminal Investigations raided the offices on Monday and hauled off 20 computers, effectively shutting down one of the country's two independent newspapers, the group said.

Their warrant allowed them to seize any computers used to commit "acts that constitute the crime of outrage against the state, the person of the president, and the organs of the executive," CPJ said.

"The seizure of Folha 8's computers is a crude act of censorship meant to silence one of the few remaining independent news outlets in Angola," said CPJ's Mohamed Keita.

"Satire is not an outrage against the state -- it's an important part of robust debate in a free society. We call on authorities to return Folha 8's equipment at once and put an end to this politically motivated investigation."

The raid came two days after police violently broke up a protest by youths in the capital Luanda and the southern city of Benguela. They were calling for Dos Santos to step down and denouncing the appointment of a ruling party member as the head of the national electoral commission.

Angola is due to hold elections later this year, only the third since gaining independence from Portugal in 1975.

The first election was in 1992, although it was never completed because the civil war re-ignited, and the second was in 2008, six years after the end of the conflict.

The ruling MPLA won by over 81 percent and has used its commanding parliamentary majority to pass a raft of new laws including a new constitution, which has abolished direct presidential elections.

The head of state will be chosen from the top of the winning party list in this year's polls, expected to easily hand Dos Santos another term in power.