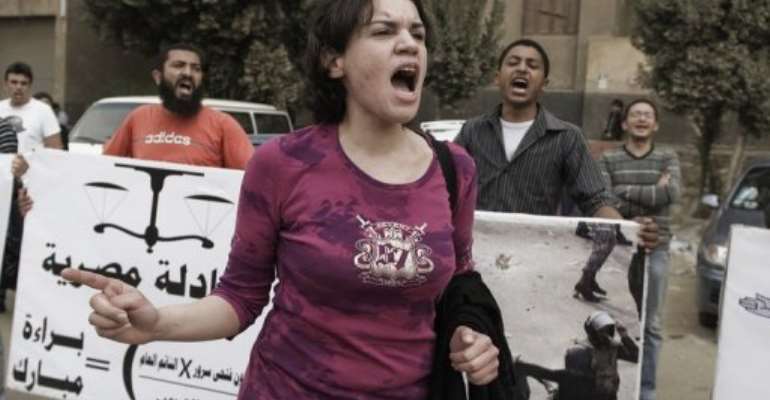 Getting the case into the military court was considered a victory for the female protesters. By Gianluigi Guercia (AFP)

CAIRO (AFP) - An Egyptian military court on Sunday acquitted an army doctor accused of conducting forced "virginity tests" on female protesters last year, in a case that had sparked a national outcry.

Ahmed Adel was cleared of conducting the test on Samira Ibrahim, who brought the case against him, after the judge found the witness statements to be "contradictory", the official MENA news agency said.

The ruling comes "from what has been proven in documents and based on my conscience," the judge said according to MENA, adding that he had "not been subjected to any pressures."

Adel was accused of "public indecency" and "disobeying military orders", after the initial charge of rape had been dropped.

"It's a joke, a theatre," an outraged Samira Ibrahim told AFP after the ruling.

"The fact that the case was in a military court is a disaster," she said.

But Huwayda Mostafa Salem, the lawyer for the defendant, told reporters outside the court: "The case was not strong in the first place. It was brought about due to media pressure."

Getting the case into court was considered a victory for the female protesters who were subjected to the tests and had raised hopes of further trials of those accused of abuse.

"The ruling shows how politicised the military justice system is, and the lack of independence there," said Heba Morayef, researcher at Human Rights Watch's (HRW) North Africa division.

"The implications are far reaching and the hope that there will be any accountability for the military will be receding," Morayef told AFP.

The case arose from two complaints filed by Ibrahim, who in December won a case against the military which saw the court order the army to stop forced virginity tests on female detainees.

Ahead of the hearing, Amnesty International said the court's decision would "show if Egypt's military courts are prepared to offer any redress for female victims of violence by the army."

"Ever since this unacceptable episode, which is nothing less than torture, women protesters have repeatedly faced beatings, torture and other ill-treatment at the hands of Egypt's army and security forces," the London-based watchdog's deputy Middle East and North Africa director, Hassiba Hadj Sahraoui, said.

"The 'virginity tests' trial is a rare opportunity for Egypt's military to signal that torture by the army does not go unpunished and that perpetrators of human rights violations among its ranks will be held to account," she added.

Women said they were beaten, given electric shocks, subjected to strip searches while being photographed by male soldiers, then forced to submit to "virginity tests" and threatened with prostitution charges.

An army general defended the practice at the time saying: "We didn't want them to say we had sexually assaulted or raped them, so we wanted to prove that they weren't virgins in the first place."

Sunday's ruling could also have implications for other cases filed by women against the ruling Supreme Council of the Armed Forces, which took power when Mubarak was ousted, for violence against them.

In December, a video of military police dragging a woman along the ground with troops surrounding her and kicking her on the chest, as well as an another video showing military personnel beating a female protester sparked further outrage.

"Despite SCAF's apologies and promises to investigate the numerous reports of violence against women by the army and security forces, the victims told Amnesty International that little has been done to bring those responsible to justice, or to provide these women with reparation," the rights watchdog said.