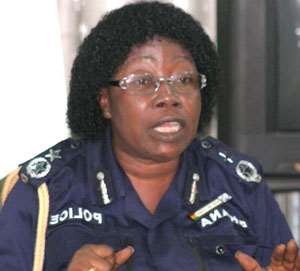 The Police Administration has made major command changes, especially in the Greater Accra and Ashanti regions.

The movement, about which DAILY GUIDE predicted earlier, is part of an arrangement towards the forthcoming 2012 polls. It has also been informed by the promotion of some superior officers such as COP Rose Atinga Bio from a previous rank of DCOP.

The Ashanti Regional Police Commander, DCOP Patrick Timbilla, who was left out of the recent promotion exercise, takes over from COP Rose Atinga Bio who, by virtue of her new rank, must move to the headquarters.

The Tema Regional Commander, DCOP Augustine Gyening, takes over from DCOP Timbilla as predicted by DAILY GUIDE a couple of weeks ago.

DCOP Mina Ayim, Director of Community Policing, now moves to the Police Headquarters as Director General in charge of Welfare.

His Second-In-Command, Chief Superintendent Mohammed Fusseni Suraji, now takes over the headship of the unit.

DCOP Maxwell Sikapasco Atingane moves from the Police Headquarters to Tema as the new Regional Commander.

Other officers affected by the shake-up are DCOP David Nenyin Ampah Benin, Director General in-charge of Welfare who is now going to head the Technical Division.

Speculation about the replacement for DCOP Patrick Timbilla has been in the air for a while now, especially on the political turf.

When DAILY GUIDE carried a story about a scheduled transfer of top police officers as part of preparations towards the 2012 elections, pro-government elements sought to discredit it.

The Police Administration found the story unsavoury, especially the political advantages the movement was claimed to achieve.

The Tema Regional Commander, who now moves to the Ashanti Region, is the man who condemned the recruitment into the Service during the NPP administration as flawed.  He also accused former President John Agyekum Kufuor of recruiting armed robbers into the Police Service.

His movement to the Ashanti Region would provoke a lot of queries from non-NDC players.

DCOP Timbilla is one of the superior officers who observers claimed should have been considered in the last promotions in the Service.

He handled the Fulani menace in the Agogo area of the Ashanti Region so efficiently that the matter has virtually been confined to the backburners for now.

Hackman Owusu-Agyemang, Member of Parliament for New Juaben North, recently had cause to complain about unacceptable promotions in the Police Service recently.

The unacceptable manner in which it was conducted, he said, was repugnant to the country's stability.

He particularly pointed out in Parliament why some DCOPs were jumped over others and not promoted to Commissioners when their elevations were long overdue.

Five top police officers are said to be on the verge of retiring, having hit the compulsory retirement age of 60, barring their engagement on contract by the Police Council, headed by Vice President John Mahama.

Meanwhile, the Inspector General of Police, Paul Tawiah Quaye, has rubbished claims in a section of the media that he has been relieved of his post.

A statement from the Ghana Police Service said the Chief Constable 'is still at post, and that he has not been relieved of his duties as the Inspector-General of Police as being speculated'.

'While debunking this piece of information as a total falsehood, we wish to state that such attitudes have the potential to create unnecessary tension in the Police Service in particular and in the country as a whole,' the outgoing Director-General in charge of Administration, DCOP Dr. George Akuffo Dampare, said in the statement.

He said, 'Consequently, the Police Administration wishes to entreat all media houses and media personnel to cross-check their information before coming out, in order not to create a situation that will disturb the peace of the country.'