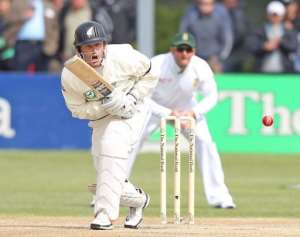 DUNEDIN, New Zealand (AFP) - New Zealand battled to 137 for two at the close of play on the fourth day of the first Test against South Africa after being set an imposing 401-run target to win.

The home side lost both openers cheaply before Brendon McCullum and Ross Taylor came together and reduced the required total to 264 with eight wickets in hand by stumps.

When bad light stopped play four overs early, McCullum was not out 58 with Taylor unbeaten on 48.

If New Zealand do pull off an unlikely victory they will have to post their highest successful fourth-innings run chase, or alternatively they could salvage a draw with the arrival of forecast rain.

The Black Caps' current record fourth innings winning total is 324-5 against Pakistan in Christchurch in 1994.

South Africa declared their second innings at 435-5 midway through the fourth day with Jacques Rudolph unbeaten on 105 -- the third centurion of the innings after Graeme Smith (115) and Jacques Kallis (113).

They then dismissed the New Zealand openers on either side of the tea break with Martin Guptill the first to fall for six, edging Vernon Philander to AB de Villiers in the slips. Rob Nicol was dismissed for 19.

Nicol had been at the crease for 90 minutes and weathered a torrid spell of pace bowling from Philander and Morne Morkel before losing his wicket to a full toss from leg spinner Imran Tahir which he lofted to Smith at mid-on.

At 55-2, Taylor joined McCullum in the middle and the pair set about rebuilding the innings, putting on an unbeaten stand of 82.

Until New Zealand's most experienced Test batsmen came together the day had belonged to South Africa, who resumed their second innings at 268-3 and added a further 167 for the loss of two more wickets before Smith declared.

New Zealand's hopes were boosted early with Kallis adding only six runs to his overnight 107 before he played an uncharacteristic lofted shot off left-armer Trent Boult and was caught by Nicol at midwicket for 113.

But de Villiers joined Rudolph at the crease and they built on South Africa's lead, adding 70 runs for the fifth wicket.

The partnership was broken when New Zealand turned to part-time spinner Kane Williamson, who had de Villiers caught at deep midwicket by McCullum for 29, leaving Mark Boucher (34 not out) to partner Rudolph until the declaration.

South Africa declared after Rudolph brought up his century, the sixth of his career, with a four off Daniel Vettori.

Doug Bracewell was the most successful of the New Zealand bowlers with three for 70 while Williamson finished with 1-16 and Boult 1-93.