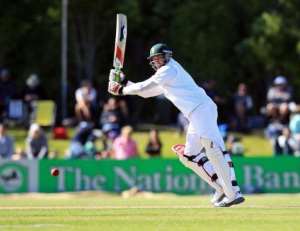 South Africa were in trouble at 47 for two, only 12 runs ahead, when the pair came together to forge a 200-run stand on an even University Oval wicket. The tourists were 268-3 in their second innings at stumps.

Smith's captain's knock of 115 came to an end with the arrival of the second new ball late in the day while Kallis atoned for his first innings duck to reach 107 not out at stumps with Jacques Rudolph on 13.

New Zealand were bowled out early in the morning session for 273, a lead of 35 runs, and they had reason to feel confident when Doug Bracewell dismissed Alviro Petersen (25) and Hashim Amla (2) in a five-ball burst.

But from there South Africa's senior batsmen Smith and Kallis set about regaining the initiative in a carefully measured partnership.

Smith took 234 balls for his 115 while Kallis has faced 236 deliveries. Smith has never lost a Test in which he has reached 100.

Kallis brought up his century with a five off Chris Martin when he played to cover-point for a quick single and the fielder's return went past the stumps and across the outfield to the boundary.

Martin, New Zealand's chief destroyer in South Africa's first innings, had no luck the second time around in the field with Bracewell the only bowler to taste success.

Following his two early wickets, Bracewell returned with the new ball to bowl Smith with a good length delivery that came back and caught the inside edge.

He also had a successful LBW appeal against Rudolph overturned on appeal, finishing the day with 3-53 from 18 overs.

Rudolph appeared ready to walk when given out by umpire Aleem Dar but Kallis insisted on going for the review, which showed the ball had pitched outside leg stump.

On a day when New Zealand had little to celebrate, there was one moment to cherish after play resumed in the morning.

In the second over of the day Trent Boult belted 22 off Vernon Philander including three sixes.

Philander was the most successful of the South African bowlers with figures of 4-72 from 18 overs.