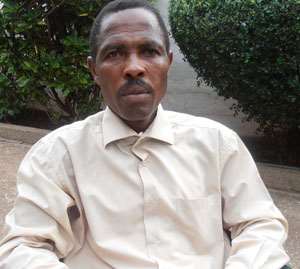 'AFTER SEVERAL years of keeping quiet in the midst of internal wrangling and divisions in the ruling government coupled with the inability of the President to hold the party together,  I have now been asked by God to announce to the whole world why 'Atta Mills must fail but not NDC.'

This is the prophecy of Mawulawoe Vincent Kwame, an Accra-based evangelist.

In an interview with DAILY GUIDE , he gave a litany of wrong moves the president had made and for which reason, he will fail.

Mr. Mawulawoe said after the 2008 election, President Mills first traveled to Nigeria to give thanks to God for his victory and back home in Ghana; he visited another Nigerian pastor's church for the same purpose.

'Why did the President choose Nigerian pastors? Is there no God or man of God in Ghana?' he asked adding the President knew what he was doing by sticking to Nigerian preachers.

The man of God noted that even though President Mills professes and proclaims to the world to be a God-fearing man, there has been no proof of this in the course of over three year tenure.

'Under President Mill's era the level of insults among politicians has reached breaking point or simply put 'justice is turned back and righteousness stands far off, for truth has fallen in the street and equity cannot enter so truth fails, and he who departs from evil makes himself a prey according to Isaiah 59:14-15,' he added.

He said it was time for men of God to take their place as referees on the political field and correct the wrongs in the system appealing to all the people of God to work together to ensure the President steps down honorably.

On the Woyomegate scandal he said former Attorney General Martin Amidu has done his part by coming out to pronounce the truth of the matter. 'It is up to President Mills to engage an institution like Economic and Organised Crime Office (EOCO) and other relevant institutions to investigate the case.'

According to the man of God, since the president is unable to end the daily internal wrangling in the ruling government and unite his own people, he must resign. He said he was not surprised by President Mills' poor performance because

'On November 3 2007, the word of God came to me that Atta Mills will win the 2008 election but he will definitely have a problem.'

He said the president did not adhere to a divine revelation he gave him to meet ex-President Rawlings and pray with him.

Making reference to the biblical story of Prophet Elisha and Naaman, the Syrian Army General who was cured of leprosy, the evangelist said Naaman would not have been healed if he had not obeyed the prophetic instruction to bathe in the Jordan River. In the same way presidents should follow the directions of God.

'The President has brought division and confusion in the NDC which can result in the collapse of the party since a divided kingdom ends in ruin; a city or a house divided against itself cannot stand,' he said.

Free SHS Graduates Gather To Campaign For NPP
37 minutes ago