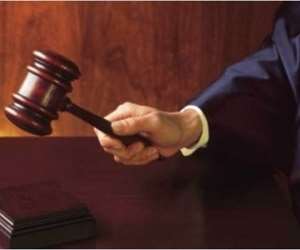 Inspector Bismarck Boye Lartey told the court that the police had a tip-off that some young men were selling and smoking Indian hemp (“Wee”) at the Wamfie public cemetery on February 25.

He said a team of police personnel led by the Municipal Police Commander, Deputy Superintendent of Police Mahamud Yussif, swooped on the cemetery and arrested Adjei while his accomplices bolted.

Police found the substance on Adjei, some pieces of paper, a smoking pipe and cash of GHc43.80.

At the same court Seidu Osman alias “Abusua”, a suspected fraudster who allegedly sold brass as gold has appeared before the court for defrauding by false pretence.

Osman, who allegedly teamed up with two others, now on the run, and duped their victim to the tune of GHc3, 100, was remanded for two weeks.

Prosecuting, Inspector Lartey said the complainant in the case was a miner at Akwatia in the Eastern Region.

He said in August, 2011 the complainant traveled to Sefwi-Juabeso in the Western Region to acquire a piece of land for mining and met the accused and two others (now at large) who in a discussion told the complainant that they knew someone in Dormaa-Ahenkro who had gold for sale.

The complainant followed the accused and his colleagues to Gonokrom near Dormaa-Ahenkro where they introduced one Seidu Fuseini, Amidu and an unidentified person to him as owners of the gold.

He said the accused then brought out a substance and told the complainant it was gold.

The complainant tested a sample of the substance, certified it and made a deposit of GHC3, 100 and asked them to accompany him to Kumasi for the rest of their money.

Inspector Lartey said upon reaching Dormaa-Ahenkro, Fuseini who had the substance in his possession, handed it to the complainant and asked him to wait while he (accused) and his friends went to the mosque to pray.

He said neither the accused nor any of his colleagues returned placing the complainant in a dilemma and compelling him to open the parcel handed to him which revealed brass instead of gold.

Prosecution said the police retrieved the GHC3,100 from the accused when he was searched.

The court sentenced Kwasi Dominic, an ex-convict who had served a three-year jail term for theft to another three years in prison for stealing wet cocoa beans.

Dominic pleaded guilty.
The prosecutor, Inspector George Kumah, said the complainant was a cocoa farmer at Anomaakura near Nkrankwanta.

He said on February 19 this year the farmer detected that cocoa beans he had heaped to ferment had been stolen.

Prosecution said the same day the accused sent a quantity of wet cocoa beans to a purchasing clerk to sell but the clerk declined to buy the cocoa knowing that the seller was a criminal who did not own a cocoa farm in the area.

He said while transacting business with the accused, the purchasing clerk had wind of the complainant's lost cocoa and quickly alerted the police who arrested him.

Yaw Ntow of Kofi-Nti Shed village near Nkrankwanta who had also just completed a two-year jail term for stealing was sent back to prison for three years for stealing maize.

He pleaded guiltyt.
Prosecuting, Inspector Joseph Akwetey said the complainant in the case harvested his maize and kept it in a barn at Kofi-Nti Shed.

The prosecutor said the accused took advantage of the absence of the complainant who had traveled to Sefwi to visit his family and stole all the maize in the barn.

Prosecution said the complainant's own investigations led him to confront the accused who confessed to having stolen and sold the maize.

Inspector Akwetey said with the help of others the complainant arrested the accused and handed him over to the police.

During his trial, the accused he had just ended a two-year jail term imposed by the same circuit court for stealing.