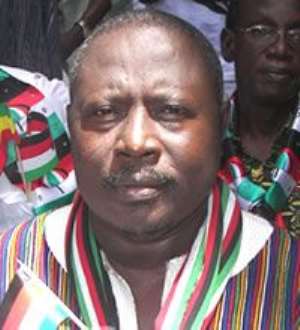 Former Attorney-General and Minister of Justice, Martin Amidu, has once again challenged civil society groups in the country to rise up to “mobilise and sustain” the interest of the citizenry in the fight against the “unwarranted and unconstitutional expropriation” of the national kitty under the Mills-Mahama led National Democratic Congress administration.

The honour was billed to be conferred on Mr Amidu yesterday by the Centre for National Affairs, a civil society group dedicated to the protection of the national interest.

Mr Amidu says his anti-corruption crusade against the ruling NDC is not motivated by the desire for honours but the desire to see an end to the “unwarranted and unconstitutional expropriation” which has ostensibly reached alarming heights under President Mills.

Just like his recent call on all Ghanaians to join his anti-corruption crusade, as Citizen Vigilantes, the former A-G expects civil society groups to also mobilise the masses against the loot of the national kitty.

He told the group that wanted to confer honours on him: “If the Centre for National Affairs is able to mobilize and sustain the interest of patriotic Ghanaians in the defence of the financial rights and interests of the Republic of Ghana against unwarranted and unconstitutional expropriation, you would have done honour and given intangible awards to all Ghanaians who sought and are seeking probity, accountability, and transparency in the body politic.”

“I am, with the utmost regret, unable to accept the honour and the award. My acceptance of the award will defeat and undermine the very purpose of my efforts in this direction for over the past thirty years, and particularly my immediate press statement and interview with citifm which was to ask every patriotic Ghanaian to become a Citizen Vigilante generally in matters that affect and impact upon his or her life as a beneficiary of the proprietary rights and interests of the Republic of Ghana,” he stated.

Mr Amidu added: “In particular, and immediately, I wanted patriotic Ghanaians to be Citizen Vigilante over the pre-trial pleadings and processes as well as trial processes of the case of theAttorney-General vrs. Alfred Agbesi Woyome to ensure that the case for the Republic of Ghana is competently presented to the Courts for an informed decision to be made on the matter.

“This is because due process of law without competent and efficient pre-trial preparations on both sides is hollow. It was not my intention to personalize the very important national issues affecting the rights and interests of the Republic of Ghana for personal recognition or populist projection of a selfish or ambitious personality. I did not also intend such very important national interests to be given partisan colorations or interpretations.”

According to the letter of invitation signed by Ransford Osei Yaw, Executive Director of the Centre for National Affairs, the group had wanted to the “Knight Commanders of the Most Excellent Order of the GOLD COAST” on Mr Amidu.

The accompanying citation reads among others: “By your actions and deeds, you have joined those who answered the call from our fore fathers to be bold, honest, and fearless in defending the good name of Ghana. Undoubtedly, your name will forever be etched in the hearts of men and women who thirst for social and economic justice in our dear nation. May it be known by the good people of this country that Martin A.B.K. Amidu ,a former minister of state opted to put his job up to defend the defenceless , inspire the hopeless ,and held the flag of Ghana high.