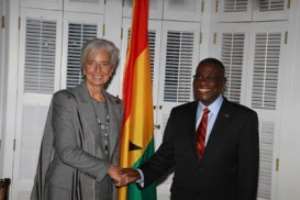 President of International Monetary Fund (IMF), Christine Lagarde has lauded Ghana for its co-operation with the Fund managers and the prudent measures adopted so far to substantially improve the Ghanaian economy.

She commended President John Evans Atta Mills for his personal engagement, and the Government's economic team for good fiscal policies that had engendered a strong path for rapid economic growth.

Madam Lagarde gave the commendation at a meeting with President Mills, shortly after he arrived with First Lady Naadu, at the Blair House, Washington DC, at the start of an official visit to the United States of America (USA) on Wednesday.

Madam Lagarde, who described Ghana as a valued member of the organisation, said Ghana was on a strong path to growth.

Recent reports on Ghana's economic performance by the Bretton Woods institutions indicated that Ghana remained on track as it recorded significant progress in all sectors of the economy.

A recent World Bank report indicated that in 2011, Ghana was the fastest growing economy in the world, recording a single digit inflation of 8.5 per cent, and a decline in interest rates to the lowest level in four decades.

Madam Lagrade said the IMF was impressed with the progress Ghana was making and promised that the partnership between the IMF and Ghana would continue and that the Fund would offer technical assistance to Ghana with its discovery of new commodities.

President Mills, for his part, expressed Ghana's appreciation to the IMF for being “understanding” with Ghana's procurement of the Chinese loan, saying Ghanaians were extremely happy with that gesture.

He said the gesture was unprecedented since the development facility would be used to provide infrastructure.

'We want to do the very best we can so that our people can benefit from this facility,' President Mills said.

He was also thankful for the co-operation that existed between Ghana and the IMF.

'We appreciate the depth of support and readiness to help. If the economy is being described as one of the best, it is because of the support we have from you,' President Mills said.

During the visit, President Mill would lay a wreath at the Arlington Cemetery, would later meet US President Barack Obama at the White House for bilateral discussions on issues of common interest.

President Mills is billed to also meet business leaders, senators and congress men and women, US Attorney General Eric Holder and Mr Patrick Fine, the Vice President of the Millennium Challenge Corporation, among others.