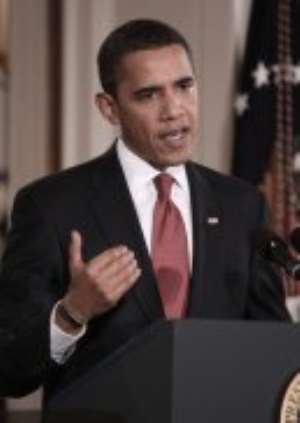 The President, Prof. John Evans Atta Mills, was Thursday accorded a warm reception at the White House, where he held bilateral discussions with President Barack Obama.

The two leaders had the opportunity to discuss shared objectives in advancing development, as well as the commercial and economic ties between the two countries.

They also discussed cooperation and a host of other bilateral, regional and multilateral issues, and deepening of partnership between the two countries.

The visit to the White House gave the opportunity to President Obama to reciprocate the hospitality he and his wife, Michelle, were accorded during their visit to Ghana in 2009.

Receiving President Mills to the White House in Washington DC, President Obama lauded Ghana for its democratic credentials, saying the country had become the bastion of democracy in Africa.

He said there was increased transparency, respect for human rights, press freedom and rule of law in Ghana, attributes which have boosted the country’s image in the international community.

The American leader was full of praise for President Mills for his initiatives to provide a wide range of infrastructure,and for observing human rights and adhering to the rule of law.

Focusing on the partnership between Ghana and the United States of America (USA), President Obama said the economic and trade ties between the two countries had created many job opportunities.

Expressing confidence in the future growth of the partnership between the two countries, President Obama said he was proud of the level of cooperation and relationship between Ghana and US.

Responding President Mills said he was delighted that the relationship between the two countries was yielding positive results.

He commended the US for its support for Ghana, especially the construction of the George Bush Highway in Accra.

He spoke about the December 2012 elections and declared his commitment to ensure peaceful elections.

President Mills said his commitment to peaceful election was born out of the fact that in the event of violence, it was not the leaders who might suffer but the majority of the people in the country, particularly women and children.

During President Obama’s visit to Ghana in July, 2009, he held a breakfast meeting at the Castle, Osu, with a cross-section of Ghanaians and also addressed Parliament.

The visit of President Obama to Ghana was his first presidential trip to sub-Saharan Africa.

At the time, he bypassed his father's native Kenya and visited Ghana, which is hailed as a beacon of peace and democracy in a volatile region.

'The people of Ghana have worked hard to put democracy on a firmer footing, with peaceful transfers of power even in the wake of closely contested elections,' President Obama told the Ghanaian Parliament during his visit.