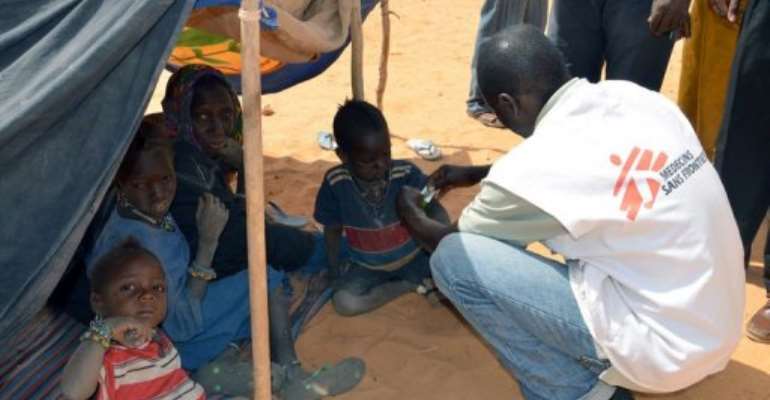 A MSF (Doctors Without Borders) worker checks on children at a Malian refugee camp in Chinegodar, western Niger. By Boureima Hama (AFP/File)

DAKAR (AFP) - Clashes between the army and Tuareg rebels in northern Mali have forced 172,000 people to flee their homes since mid-January, the United Nations humanitarian office (OCHA) said Thursday.

"The number of people displaced by the conflict reached more than 172,000 at the beginning of March, including more than 90,000 who have fled abroad, mostly to Mauritania, Burkina Faso and Niger," read a statement from the agency.

The numbers have swelled by nearly 50,000 in two weeks.

Tuareg rebels are waging their biggest offensive since a 2009 rebellion as they demand autonomy in Mali's vast north, and have launched several attacks on towns in the region since mid-January.

There have been reports of scores of executions, and deaths of civilians and soldiers in the fighting.

Mali and Niger experienced uprisings as the Tuareg fought for recognition of their identity and an independent state in the 1960s, 1990s and early 2000s, with a resurgence between 2006 and 2009.

Many Tuareg left for Libya where they later fought for Moamer Kadhafi's regime, but after his death in October they returned home, some heavily armed.