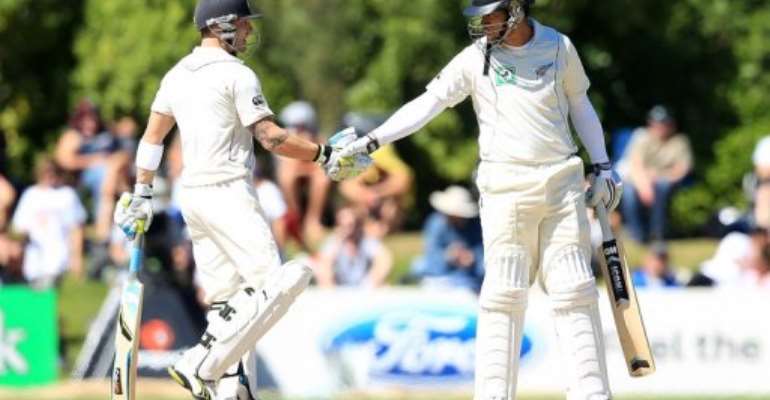 DUNEDIN, New Zealand (AFP) - New Zealand ground out a narrow lead over South Africa on the second day of the first Test in Dunedin Thursday despite a four-wicket haul for Proteas paceman Vernon Philander.

With the tourists bowled out for a disappointing first innings total of 238, Philander's four for 50 played a crucial part in preventing New Zealand from building on a solid start with the bat.

The Black Caps ended the day at 243 for nine, a five-run advantage that appears unlikely to increase significantly with tailenders Trent Boult (8) and Chris Martin, yet to score, at the crease.

While the New Zealanders will be pleased to overhaul South Africa's total, they face the prospect of batting last on a University Oval pitch likely to deteriorate in the final days.

South Africa resumed at 191 for seven and Jacques Rudolph notched his 10th Test half century as the tourists added extra 47 runs before they were all out within the first hour of play.

The bowler sent deliveries crashing into Taylor's sternum, shoulder and gloves, making it a bruising 28th birthday for the New Zealand skipper on his return from a six-week injury layoff.

Brendon McCullum also faced his share of bouncers but combined with Taylor for a stubborn 65-run partnership.

Spinner Imran Tahir was brought into the attack for a change of pace, making the breakthrough when McCullum mistimed a sweep on 48 and top edged to the bowler.

Veteran Daniel Vettori (46) and South African-born debutant Kruger van Wyk built a valuable 53-run partnership before Vettori was caught and bowled hanging out his bat to a Jacques Kallis delivery.

South Africa's decision to take the new ball late in the final session paid immediate dividends as Philander dismissed van Wyk for 36 and Tim Southee for a duck with almost identical deliveries that carried to Graeme Smith at slip.

Ex-I.Coast president Gbagbo warns of 'disaster' in upcoming ...
51 minutes ago