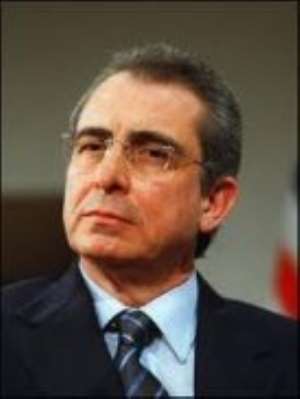 Thisâ€ˆyear's Aggrey-Fraser-Guggisberg Memorial Lecture series organised annually by the University of Ghana, Legon, will be

delivered by a former President of Mexico, Dr Ernesto Zedillo.

The Aggrey-Fraser-Guggisberg Memorial Lectures constitute the most prestigious lecture series and the high-point of the intellectual calendar of the country. It has been the practice to leave the lecturer free to choose a theme and topic for the lectures.

The three-day lecture series begin today on the theme: “Globalisation and Governance - What does the future hold”? The lectures will start at 5 p.m. daily at the Great Hall of the University of Ghana, Legon.

The lecture series were instituted in 1957 to commemorate the contribution made to the founding of Achimota College and the advancement of education, particularly higher education, in Ghana. The lectures have become a great event to which the Ghanaian public looks forward.

Today’s lecture will be chaired by the Vice Chancellor of the University of Ghana, Legon, Professor Ernest Aryeetey, with the Registrar, Mr J.M. Budu,who will call the meeting to order. Dr Zedillo will speak on the topic; “Latin America’s Development Experience and Challenges - Any Relevance for African Countries?

On the second day of the lectures, which will have His Lordship Justice Prof. S. Date-Bah, Chairman of the Council as chairman, the presenter of the lecture, Dr Zedillo, will deliver the first part of his topic; “The Unequal Race between Globalisation and Governance - Recent History and Speculations about the Future” and present the second part the following day, which is the third day of his lecture series, which will be chaired by His Excellency, Mr Kofi Annan, Chancellor of the University and former United Nations Secretary-General.

Dr Zedillo who is a Professor in the Field of International Economics and Politics is currently the Director of the Yale Center for the Study of Globalisation, Professor Adjunct of the Forestry and Environmental Studies at the Yale University, as well as a Professor of International and Area Studies. He earned his Bachelor's degree from the School of Economics of the Natìonal Polytechnic Institute in Mexico and his Master of Arts and Doctor of Philosophy degrees at the Yale University. He was a Professor at the Natìonal Polytechnic Institute and El Colegio de Mexico.

From 1978-87 he was with the Central Bank of Mexico; from 1987-88 where he served the National Government of Mexico as Undersecretary of Budget; from 1988-1992 as Secretary of Economic Programming and Budget Education; and was appointed Secretary of Education in 1992.

Dr Zedillo served as President of Mexico from 1994-2000. Since leaving office in 2000, Dr Zedillo has been a leading voice on globalisation, especially its impact on relations between developed and developing nations.

From 2003 to 2011, he was the Chairman of the Board of the Global Development Network, an organisation that works

with developing country researchers and policy research institutes to support the generation and sharing of world-class policy relevant to research on development and helping to strengthen capacity in the process.

In 2006, Dr Zedillo was honoured with the Sustainable Development Leadership Award, presented to him by R.K. Pachauri on behalf of the Energy Resources Institute (ERI) in New Delhi.

In 2007 and 2008 he served on the Commission on Growth and Development, chaired by Nobel Laureate Michael Spence. The

Commission's final publication, The Growth Report: Strategies for Sustained Growth and Inclusive Development, was launched in May of 2008.

He is a member of the Global Development Programme Advisory Panel of the Bill and Melinda Gates Foundation.

During the same period of 2007-2008 he was asked by the Director-General of the International Atomic Energy Agency, Mohamed

ElBaradei, to chair a Commission to recommend the future course of the IAEA. In May 2008 the Commission published its report,

Reinforcing the Global Nuclear Order for Peace and Prosperity. Currently Dr Zedillo serves on the International Commission on Nuclear Non-proliferation and Disarmament.

In the fall of 2008 he was appointed by the President of the World Bank to chair the High Level Commission on Modernisation of World Bank Group Governance to offer an independent view on how the World Bank Group's governance needed to adapt to the international economic realities of the 21st century. He edited and wrote the introduction to the volume, “The Future of Globalisation - Explorations in the Light of Recent Turbulence (Routledge, 2008).

He recently edited and wrote the introduction to the volume, Global Warming - Looking Beyond Kyoto (Brookings Institution Press and Yale Center for the Study of Globalisation, 2008). He was a member of the High Level Task Force on Climate Change organised by the Club de Madrid and the United Nations Foundation and chaired by former President of Chile, Ricardo Lagos. The Commission's final report is the framework for a Post-2012 Agreement on Climate Change: A Proposal of the Global Leadership for Climate Action.

Along with former United States Under Secretary of State for Political Affairs, Thomas Pickering. Dr Zedillo served as co-chair of the

Partnership for the Americas Commission and co-chairs the Latin American Commission on Drugs and Democracy along with former presidents Cesar Gavaria of Colombia and Fernando Henrique Cardoso of Brazil. Dr Zedillo served as a member of the High Level Commission on Legal Empowerment of the Poor, co-chaired by Madeleine Albright and Hernando de Soto, which launched its final report, Making the Law Work for Everyone in the summer of 2008

Dr Zedillo wrote the preface to the volume, Global Trade and Poor Nations: The Poverty Impacts and Policy Implications of Liberalisation co-published by the Yale Center for the Study of Globalisation, the Groupe d'Economie Mondiale of Sciences Po, and Brookings Institution Press in 2007. He currently chairs the second phase of the project, Global Trade and Financial Architecture, co-sponsored by the Center and the U.K.'s Department for International Development (DFID).

He was appointed by Secretary General Kofi Annan to be the United Nations Special Envoy for the 2005 World Summit. Also in 2005, the Center produced the volume, Reforming the United Nations for Peace and Security - Proceedings of the YCSG workshop to analyse the Report of the High-Level Panel on Threats, Challenges and Change (Yale Center for the Study of Globalisation, 2005).

Background to the lectures

The Director of Public Affairs of the University of Ghana, Legon, Mrs Stella Amoa, told the Daily Graphic that the lectures were instituted in honour of James Kwegyir Aggrey, a native of Anomabu, in Ghana who was a great African visionary

and spokesman for racial harmony and equality.
She said they were also instituted in honour of Alexander G. Fraser, a humane, courageous and far- sighted Scottish educationist, who was the First Principal of Achimota School, a prominent Secondary School in Ghana, and Gordon Guggisberg, perhaps, the best administrator that Britain ever sent to govern a West African colony.

Mrs Amoa said there would be a special congregation on the last day of the lecture series on Friday, March 9, 2012.

At this congregation, the Public Affairs Director said an honourary degree would be conferred on Dr Zedillo.

She said the special congregation which would have a Council and Academic procession, interspersed by drumming, would be opened and dissolved by the University Chancellor.