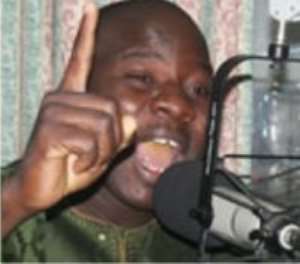 Another scandal of monumental dimensions is brewing at the Ministry of Education where a contract of $44 million for the supply of Atlas books for Junior High Schools (JHS) has been awarded, with Deputy Minister of Education Mahama Ayariga ordering the Ghana Education Trust Fund (GETFund) to look for money at all cost and pay.

Mahama Ayariga, though in charge of Tertiary Education, was neck-deep in the supply of books to Junior High Schools, and this has raised eyebrows. He said five publishers had been contracted to "print text books for the pre-tertiary schools”.

The book itself did not meet the standards, according to sources, and it was likely to be rejected by the schools.

“Under the terms of the contract, 50% mobilization is expected to be advanced to the publishers against advance payment guarantee from a financial institution.

“Due to the urgency of the request, we trust that you will deal with the matter expeditiously,” Mr. Ayariga wrote in a letter dated January 31, 2012, a few days after Betty Mould-Iddrisu had resigned as Minister, owing to the Alfred Agbesi Woyome GH¢51.2 million gargantuan scandal.

Questions however were being asked about the rationale behind buying $44million books for just one subject and why Ayariga was the person leading the crusade since he was not in charge of Pre-Tertiary Education, but Mrs. Elizabeth Tetteh-Amoah, who recently lost her bid to represent Ati Mokwa constituency in Parliament at the NDC primary.

Tongues were wagging as to why a single publisher, Apporachers, was given a whooping $25 million of the contract.

With a tone of urgency in his letter, Mr. Ayariga directed GETFund to secure a loan for the purchase of the book from a financial institution.

“It would be highly appreciated if you could take steps to source a loan facility to cove the advance mobilization not exceeding the prime interest rate of 17% p.a. interest,” he indicated in the letter he wrote on behalf of the then acting Education Minister, E.T. Mensah.

But in response to the request, GETFund Administrator Sam Garba on February 2, 2012, rejected the request to take a loan to buy the books, saying that the organisation was not in a position to source funding from financial institutions.

“All the necessary steps I need to take to expedite the procurement of funds for the project have been taken without success.

“The GETFund Board of Trustees struck down any efforts to source a loan expressly for this at its meeting held on the 30th December, 2012,” Mr. Garba stated.

The Administrator called the bluff of Ayariga, saying that he would not put the matter before the Board chaired by Dr. Kwabena Adjei, NDC National Chairman again.

Strangely, the loan facility was being arranged by NDK Financial Services owned by a known NDC chieftain, Oko Nikoi Dzani.

Approachers had already approached NDK asking for a loan of $12.5 million with interest of 12 percent, making it one of the most expensive loans because of the currency.

The process to acquire the Atlas book stated from the Betty period and Ayariga was fast-tracking it before the new Minster, Lee Ocran, took office.

“With reference to the meeting held at the GETFund Secretariat with the Ministry of Education representative and chaired by the administrator of the GETfund in December, 2011 and the subsequent discussions with the Chief Executive Officer of your reputable financial institution, I write to request for the aforementioned 50% advanced mobilization of the contract. The 50% of the contract sum is Twelve Million, Five Hundred Thousand US Dollars. The agreed interest to be borne by Approachers (Ghana) Limited is 12% per-annum for a maximum period of 4 months,” Alfred Joku Obeng, Managing Director, stated in a letter to NDK.

In a letter dated February 22, 2012, sent to Ayariga, NDC Financial Services indicated that it was ready to pay 50% of the contract sum to all the five companies as mobilization fee.

But the GETFund Administrator said he was not ready to accept arrangement.

Meanwhile, Daily Guide has leant that all the companies are printing the books in India and China in order to maximize profits, instead of printing them locally.

The Ghana Publishers Association is holding a meeting on the scandal today, Daily Guide can confirm.