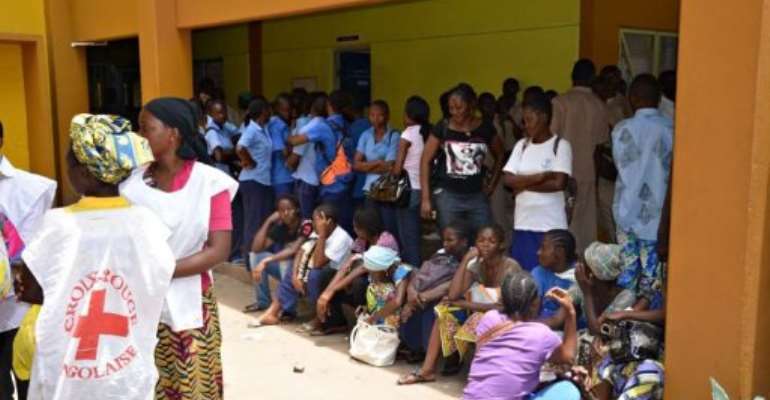 People stand in line to give their blood three days after a series of blasts at an arms depot in Brazzaville. By Patrick Fort (AFP)

BRAZZAVILLE (AFP) - Medicine is running short as hospitals struggle to treat some 1,300 people hurt in a string of powerful blasts at a munitions' dump that flattened hundreds of nearby homes in Brazzaville on Sunday.

At the university hospital, hundreds of those wounded are treated in wards, corridors, and under tents set up around the building.

And while many patients have been issued with blue slips to obtain drugs from the hospital dispensary, there are hardly any left. Families attempt to purchase medicine from private chemists.

"I'm afraid for my baby," says Roliana Masomba, a pregnant 19-year-old who repeatedly threw herself down on her belly when the huge explosions occurred.

"I'd like them to carry out some tests, I'm worried," she says as she lies on a mattress under a tent next to the hospital.

She looks dazed and wears a bandage around her partially-shaven head.

She received a deep head wound and says her ears are still painfully ringing from the blasts which killed nearly 200 people and left more than 5,000 homeless.

"When the first blast occurred, everything shook in the house" in the Mpila district of town where the armoured brigade barracks once stood.

"We ran out into the street and I was hit on the head," Roliana says.

"I was bleeding badly. We took a taxi to go to (a hospital), but the taxi was caught by the blast of a second explosion. When it fell back to ground, it was broken. We left running and I came here," she says.

On the way "whenever there were explosions we threw ourselves to the ground," she adds.

In the tent next to her, some 20 more patients also lie on mattresses.

A nurse cleans the wounds of a woman who shouts out in pain.

Next to her a patient lies with his body tied up in plasters.

Masomba's family is worried by the lack of drugs.

"On the first day we were given some, but after that they no longer had any. We had to buy them from the chemist. It cost us 40,000 francs CFA (60 euros)," says Divine, a niece.

"How are we going to manage? Mother only earns 100,000 FCFA (150 euros) and (my aunt) needs an echography for the baby and to have her head scanned ... But we're waiting because we don't have any money," says Divine.

Hugues-Marius Ndinganguesso, who lives nearby, shows a few drugs he was given in a plastic bag.

"I was given that, but it's not enough," he says as he complains of aches and pains to his back and legs.

"There's still this noise" in my ears, he says.

The heat is relentless in the tent and "at night, with the mosquitos, it's hard to sleep," says one patient.

Divine's family have lost their house.

"There's nothing left. And we don't have the means to build it again. We need help," says Divine.