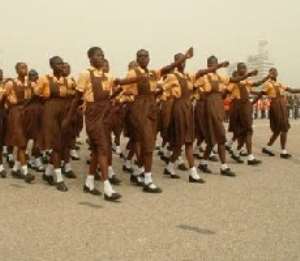 Four of casualties whose conditions were serious were referred to the Koforidua Regional Hospital while the rest were revived by the Red Cross.

This was announced by Mr Kasawu Nartey, leader of the Red Cross Team, which provided emergency health services at the parade grounds.

In a speech, the Eastern Regional Minister, Dr Kwasi Akyem Apea-Kubi, expressed regret about the poor results of the Basic Education Certificate Examination (BECE) in the Region last year and blamed it on the quality of teachers in the classrooms, indiscipline among pupils, overcrowding and ineffective supervision and appealed to all stakeholders in education to join forces to help change the situation for the better.

He expressed concern over the high rate of indiscipline in schools resulting in gang rape, drug abuse, homosexuality and occultism and called for collective efforts to change the moral direction of the educational system.

Dr Apea-Kubi said over the last three years, the government had constructed over 569 educational infrastructure in the Region, many of which had been completed and were being used by the schools with a few under construction .

He said the biometric registration exercise would start on March 24 and warned the students who are not yet 18 years not to allow themselves to be lured by some politicians to register and vote because when caught, they could be jailed.

Dr Apea-Kubi later presented the President Special Independence Award to Master Yaw Boakye Sarfo, a student of Pope John's Senior High School for being the best student at the 2011 BECE in the Region.

His former school, Trinity Presbyterian School - Adweso near Koforidua, was also presented with an award.

Schools which excelled in the march past were also presented with awards.