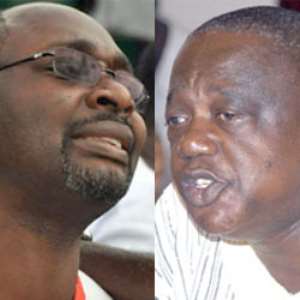 It appears the GH¢51.2million Alfred Agbesi Woyome case is becoming too hot for the Attorney General and Minister for Justice, Dr Benjamin Kunbuor to handle, as his outfit pleads for more time to assemble facts.

Cynthia Lamptey, the principal state attorney in the trial of Mr Woyome, the National Democratic Congress (NDC) bankroller, for alleged fraud, yesterday admitted that the state was yet to conclude investigations due to the complexity of the case.

Woyome had been charged with defrauding and abetment of crime along with three other persons.

The prosecutor dropped a hint that more people were likely to be charged along with the four suspects.

The state attorney, who did not give further explanation on the complexity of the case, also described it as 'an unfinished docket' and consequently prayed the court to adjourn the case for about a month to enable the state to conclude investigations.

Ms Lamptey said this before Justice John Ajet-Nassam at an Accra Fast Track High Court Financial Division where the accused persons, Woyome, Samuel Nerquaye-Tetteh, the Chief State Attorney and his wife Gifty Nerquaye-Tetteh and Paul Asimenu, Legal Director at the Ministry of Finance, are on trial in connection with the GH¢51.2 million fraud allegedly perpetrated against the state.

However, counsel for the accused persons, Kwame Akuffo and Addo Atuah, did not take kindly to the prayer for another  adjournment and said the submission of the state attorney proved the state was in no way ready to start the trial.

They wondered why the accused persons were arrested and brought before the court when the state knew they had not finished with investigations, adding that they should have concluded investigations and put their house in order before arresting the suspects.

They however said they would await directions from the bench.

Justice Ajet-Nassam refused to grant the state a month on grounds that they would relax if he did so and not speed up with the investigations.

Justice Ajet-Nassam consequently had the matter adjourned to March 26, 2012.

Ms Lamptey, at the last hearing, said the prosecuting team would need sometime for hearing to begin as some suspects would be arrested and tried with the accused persons for the alleged offence.

Lawyers Robertson Kpatsa, Musah Ahmed, Yoni Kulendi and Addo Atuah each pleaded with the court to review the bail conditions of Woyome who they said had a civil case pending and would not abscond.

Mrs. Gifty Nerquaye-Tetteh, in whose account the GH¢400,000 was lodged, pleaded not guilty to abetment of crime while Asimenu, who was arraigned for quoting wrong figures to enable Woyome to get the said amount, had denied abetting Woyome to defraud the state.

Former Attorney General and Minister of Justice Martin Amidu had already raised an alarm over the handling of the Woyome case, calling on all Ghanaians to become citizen vigilantes in a bid to compel government to retrieve the GH¢51.2million.

Mr Amidu expressed disappointment at the level of legal representation of the State in court and in a spirit of 'all die be die', he charged patriotic Ghanaians to stand up and defend the mantra of probity and accountability by being vigilant.

In a statement issued in Accra, Mr Amidu cast doubt about the quality and commitment of the state's legal representation in the quest to retrieve the controversial payment made to Alfred Woyome.

'The quality and commitment of legal representation for the Republic is very important for the success of the Republic in retrieving this gargantuan money in the face of the continued strong support from a politically immature and ignorant section of interest groups for the Government to overlook the loot,' Amidu charged.

He called on Ghanaians to join him as a vigilante citizen to recover the money because according to him, Ghana had an excellent case in recovering half of the GH¢51 million in a successful outcome of a case he instituted when he was in office.