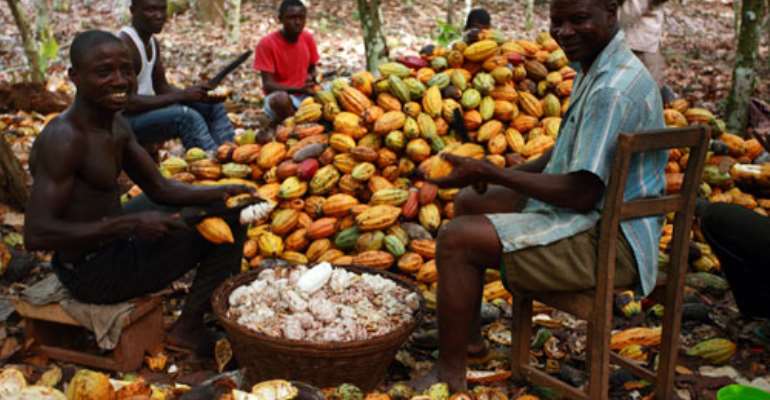 Agona Swedru, Mar. 4, GNA - Cocoa farmers in four cocoa producing Regions have appealed to the government to re-introduce the Akuafo Cheque payment system to replace the current cash payment of their products.

The farmers from Central, Eastern, Volta and Western Regions made the appeal at a-day's sensitization workshop on the re-introduction and enforcement of the Akuafo Cheque payment system at Agona Swedru, on Saturday.

The Workshop was organised by the Ghana Cocoa, Coffee, and Shea Nut farmers Association, with sponsorship from the BUSAC Fund, the Embassy of Denmark, USAID and the International Development Cooperation.

According to the cocoa farmers, the re-introduction of the Akuafo cheque would eliminate fraud and also the cheating of farmers by Cocoa Purchasing Clerks (PC's).

It will also prevent the attacks on PC's by robbers during their journey to the various farming societies to pay the farmers.

Mr Joseph Atayem Awantungo, Consultant on the BUSAC Fund Advocacy Action and Anthony N. Essuah, a researcher from BUSAC, said the workshop was to discuss the research finding they conducted on the re-introduction of the Akuafo Cheque Payment System' and the current Cash payment system' on Cocoa, Coffee and Shea nut.

They said the research revealed that over 94 per cent of cocoa farmers are over 50 years old and that a most of the youth were not into farming, a situation they described as not the best.

The research further revealed that most farmers are exposed to danger since most of them are attacked by armed robbers anytime they return to their villages after selling their produce.

The situation has also led to the keeping of huge sums of money by the farmers in their rooms, adding that, some PC's take advantage of the system and bolts with the monies meant for cocoa purchases.

The Western Regional Chief cocoa farmer, Nana Johnson Mensah said if the Cheque system is re-introduced; it will enable the farmers to save with the banks and also give them access to loans to maintain and expand their farms.

Akufo-Addo, Ken Take Ghana Back To HIPC – Mahama
18 minutes ago