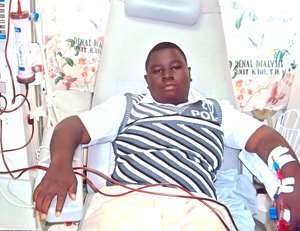 Fifteen-year-old Richard Kusi Yeboah lies on one of the hospital beds in the Renal Unit of the Korle-Bu Teaching Hospital (KBTH) with two flexible tubes inserted into the veins on his left arm.

He shrugs in his bed, as if to reposition himself from his posture of lying still, as blood passes through the tubes into a machine with special filters located close by.

He has to lie for three to four hours in that position for the machine to filter his blood and circulate it back into his body.

Richard's kidneys are not functioning and must go through dialysis, a process in which a filtering machine cleans the blood to get rid of waste and unwanted water from the body.

'Sometimes I feel bad,' says Richard who has been on dialysis for a year now. 'Sometimes I think that by this time I would be at home studying, but am on dialysis instead.'

Richard, a first year general arts student at Accra Academy Senior High School, has to go through this process three times a week if he is to continue living.

'He was eating one day after he had returned from school when he collapsed,' says Janet Donkor, Richard's mother who takes care of him alone. 'There was blood coming from his nose and mouth,' she says.

She says with the help of her neighbours, Richard was taken to the Amasanam Hospital where doctors diagnosed him as anaemic and referred him to Korle-Bu for further treatment.

'He collapsed again after he was discharged form Korle-Bu and was re-admitted for two weeks,' she says.

Janet says Richard was taken back to Korle-Bu because he once again collapsed and this time, 'he chewed his tongue.'

She says Richard could not walk and would not also respond when spoken to. 'We had to carry him and put him in the car because he couldn't walk or talk.'

Doctor's reports showed Richard's kidneys had been damaged and that he was suffering from End-Stage Kidney Disease (ESKD).

'The doctors said they had to put him on dialysis, if they didn't, he was going to die,' Janet says. 'It was hard for me.'

Alarming Increase Of Kidney Disease
The Korle-Bu Teaching Hospital recorded a total of 2,687 kidney cases at the out-patients department in 2011, against 2,131 cases in the previous year.

Dr. Charlotte Osafo, head of the Renal Unit at Korle-Bu and President of the National Kidney Foundation, says the difference in the cases represent a 31 percent increment.

She further says the unit has subsequently recorded an increase in the treatment of kidney diseases.

Dr. Vincent Boima, a nephrologist at the renal unit, says 10 percent of hospital admissions at Korle Bu are due to kidney diseases.

Most people affected with the disease are between the ages of 20 and 50.

'The young are being silently killed. These are people who are the productive group of society,' he says.

Dr. Osafo says the situation is worrisome. She attributes the increment of recorded kidney diseases to awareness creation which is making people report their situation at the hospital and not necessarily an increase in the disease among people.

'We have been having awareness campaigns to educate and sensitize the general public on the disease, so more people are coming to report their cases which formally were not happening,' she says.

She says doctors are also referring kidney cases at their early stage to the unit as a result of the awareness campaigns.

Kidney disease can be caused by the progression of diseases as diabetes, hypertension and the inflammation of the kidneys.

Bettrand Eshun and Dr. Charlotte Osafo
Dr. Osafo says other risk factors include high cholesterol, effects of some drugs and other systemic conditions such as prostate problems.

'These are all risk factors that can make the (kidney) disease progress very fast,' she says.

She says the unit uses preventive measures to halt the progression of those diseases when detected at its early stage.

'For hypertension, we advise patients to modify their diet, reduce salt intake and take medication to lower blood pressure,' Dr. Osafo says. 'If you have diabetes, we will encourage you to bring your sugar down and bring it under control.'

Dr. Boima says most people are aware they have these health conditions that can trigger kidney disease yet do not visit the hospital for regular check-ups.

'Even those who are aware (that they have the disease), how many comply with medication? How many go to the hospital regularly?' he asks.

He says most of the people come to the hospital 'crash landing' after the disease, which is less symptomatic in the early stages, has progressed.

'By the time they start to show symptoms, it is beginning to be an emergency and we are forced to put them on dialysis,' he says.

Dr. Boima adds that although it is appropriate for the disease to be detected at the early stage so health officials can institute corrective measures to delay the progression of the disease, people come in at the end stage.

'You are hopeless because you see somebody dying and you know the person is going to die,' he says. 'They would have a better chance if they came to the hospital earlier before the disease progresses.'

Treatment Cost
The dialysis unit at Korle-Bu has 135 patients on dialysis. Each patient must have at least three to four sessions per week to function normally.

Patients must pay a deposit of GH¢5,000 before starting dialysis treatment, which cost GH¢140 per session.

Dr. Boima says this is to give the unit the assurance that the patients will keep up with the treatment and keep paying in the long run.

'If you start dialysis, you need to be able to keep it up because if you stop mid-way, you have wasted money and you are going to die,' he says.

He says majority of people affected with kidney failure cannot afford renal replacement therapy. That comprises dialysis and a kidney transplant, which can cost up to GH¢40,000.

'Some families have lost everything, all their belongings and property to pay for the dialysis and then they lose their loved one when they can no longer afford the treatment,' he says.

Dr. Osafo says the people who are currently on dialysis at the unit are people who can afford the treatment.

She explains that being on dialysis is not the actual treatment for kidney failure but kidney disease.

'For kidney failure the only treatment is a transplant,' she says.

She also says the unit has lost a lot of patients because they are sometimes too weak to do regular kidney dialysis and subsequently, a transplant.

Janet Donkor, like the majority of the families who do not have the money for dialysis and a transplant, solicited funds from organizations to enable her son to undergo his treatment.

'For the past year I've struggled to take care of him,' she says.

She is however hopeful one of her kidneys, which she will be donating, will save her son's life.

In addition to its awareness campaigns, the foundation has also helped finance treatment for people who cannot afford the renal replacement therapy.

The foundation has screened more than 2,000 people for the kidney disease in the past few years: It has also financed free medical check-ups for patients.

'We help pay for dialysis and antibiotics- especially chronic cases under the age of 30, we help with the initial dialysis,' says Dr. Osafo.

In spite of the foundation's activities to help curb the issue, insufficient resources are limiting its activities.

Dr. Osafo says the foundation has some projects that are not being implemented because of lack of finances.

Dr. Boima says the unit's 18 machines, each costing about â‚¬15,000, are under pressure. 'In the near future, they will break down,' he says.

'We want to buy a sterilizer that can sterilize the artificial kidneys and also train people to use it,' Dr. Osafo says. 'All these cost money.'

She says artificial kidneys can be re-used ten times if the unit has a sterilizer.

She encourages the general public to channel their donations and contributions to the foundation's Ecobank Main Office Account Number 3034404971801 to enable it to save more lives.

She suggests organizations should bring their donations to the foundation and not directly to the patients because some patients prefer to continue with the dialysis than to undergo a kidney transplant.

A transplant is the only permanent cure for a kidney failure.

'Some of them come to my office after they have secured funding from these organizations and tell me they do not want to have the transplant anymore even though we have placed them on the transplant list,' she says.

Dr. Osafo says that once the money deposited in the foundation's account states the name of a particular patient, it will be used for that patient's treatment.

Way Forward
Renal replacement therapy is not covered by the National Health Insurance Scheme (NHIS) for patients who have chronic kidney disease. That includes most patients in Korle-Bu's renal unit.

He also says civil society can help pay for the transplants. 'Even saving one person is a help,' he says. 'We probably can't cover everybody (for chronic kidney disease) but should cover those who would get the greatest benefit from treatment.'

Rev Dr.  Fred Deegbe, General Secretary of the Christian Council, says the initiative's goal is to have a new kidney center where people can go in for kidney dialysis and eventually a transplant.

He says the public has responded well to the campaign.

'For me, what is refreshing is to get a call from London (on Rainbow FM) that Ghanaians over there in Britain and the US also want to join and give a cedi,' he says.

He says the council will extend the help to other regions in the country after the initial one at 37, to enable those outside the Greater Accra Region to also have a place for treatment.

Bertrand Eshun, head of operations and marketing at Christian Council Micro-Financing Limited, says the campaign requires the public to text the word 'kidney' to short code 1962 on all networks to donate GH¢1 towards the center or deposit their contributions to the Ghana Commercial Bank Account  number 1141130008798.

He says the council is expecting to raise $500,000 to establish the center at 37 Military Hospital.

'We are hoping we can get funds to sustain the kidney center after its establishment,' Eshun says.