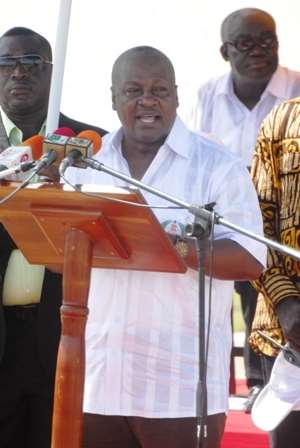 Sunyani, March 2, GNA – Vice President John Dramani Mahama on Friday commended the Catholic Church for its tremendous contributions towards the socio-economic development of the country.

He noted that “all over the country, the Catholic Church is famously recognised by their schools, health facilities, water and sanitation projects, micro-finance development and poverty alleviation, which have helped in propelling the socio-economic development of the country”.

Vice President Mahama gave the commendation when he inauguration the St James and St Patrick Catholic cluster of schools located in the precincts of Christ the King Cathedral in Sunyani.

The two projects, valued at a total cost 1,363,638.42 Euros (GHâ‚µ2,069,425.66), were constructed by the Sunyani Catholic Diocese with sponsorship from the Franciscan Friary of Italy and Spanish benefactors.

The sponsors comprised the Government of Navara, the City Council of Pamplona, the Federation of the City Councils and Municipalities of Navara and Minos Unidas of Madrid, all in Spain, as well as Caritas Antoniana of Padua in Italy.

A total of 2,454 school children are enrolled in the schools, which have canteens, sanitary facilities, boreholes and an Information Communication Technology Centre (ICT).

Vice President Mahama said a third of the national budget was on yearly basis voted support the educational sector, which serve as the engine of growth of development.

“Developing countries all over the world, especially the Asian Tigers like Japan, China, South Korea, Malaysia and Singapore over the years invested so much of education and are today enjoying the benefits,” he added.

Mr Mahama said from 2013 and 2015, new community senior high schools (SHS) would be established with libraries, laboratories and other facilities to absorb more basic school graduates.

The Vice President said the initiative would also ensure that the lowest level of education in the country in future would no longer be basic but secondary education.

He promised to furnish the school with 20 computers and accessories to enhance the teaching and learning of the ICT.

Most Reverend Matthew Kwasi Gyamfi, Catholic Bishop of Sunyani, appealed to the government to re-define the roles and responsibilities of the partnership between the church and state in the management of missionary schools.

He said it was demoralising when churches were denied management roles in missionary schools, which tend to have repercussions on the development and growth of such academic facilities.

Mr Kwadwo Nyamekye Marfo, Brong Ahafo Regional Minister, said a total of 176 schools under trees in the region had been phased out since 2009.

He said government had also supplied a total of 125,501 free school uniforms, whilst 2,603,078 exercise books had been distributed to the pupils.

He said 24,860 pieces of furniture consisting of desks and bunk beds for SHSs.

Mr Nyamekye Marfo announced that in line with the government's commitment to the improvement of ICT literacy and particularly in the region, 150 lap tops had been supplied to 10 rural schools.

He said plans were far advanced for the supply of additional 6,120 computers and accessories to 255 schools by the end of the year.

Dr George Adjei-Henne, Regional Director of Education, said the training of children in school is a joint and shared responsibility of government, parents, teachers, the church as well as students.

He said the government regards the church as a partner in development, hence the commitment of government to offer missionary schools teachers and some non-teaching staff who are paid by the State.

Reverend Father Martino Corazzin, a Franciscan Missionary and Parish Priest of Sacred Heart Catholic Church in Sunyani who is the brain behind the financing of the project said it started in 2008 in three phases.

The first phase involved the construction of the school buildings from the Kindergarten to the Junior High level, the second phase was the provision of the canteen, boreholes and sanitary facilities, whilst the third phase secured the structures with fence wall.