Non-Ghanaians advised not to take part in biometric registration exercise 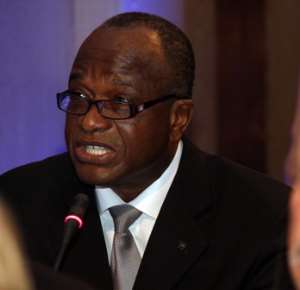 Winneba, March 2, GNA - Non-Ghanaians residing in the country have been advised not to allow themselves to be influenced by politicians to attempt to register when the biometric voter registration exercise starts later this month, to avoid being prosecuted.

The Minister for Land and Natural Resources, Mr Mike Hammah gave the advice on Thursday in an address read by The Very Rev Eldad Bonney, Presiding Member of the Effutu District Assembly at a day's orientation session for the second batch of 42 beneficiaries and three coordinators from the Niger River and Bayelsa states in Nigeria currently underway in Winneba.

The group are undergoing nine months welding and fabrication training at the Winneba Vocational Training Institute sponsored by Amnesty International.

Mr Hammah stated that the registration exercise was solely meant for Ghanaians and not any other nationals in the country.

He pointed out that any foreigner found to have attempted to register would be arrested and prosecuted.

The Minister said Ghana and Nigeria shared the same dreams and aspirations and appealed to the trainees to desist from anything that could undermine the cordial relationship existing between the two countries.

He urged them to concentrate on their training to enable them to acquire the needed skills to become productive in their country rather than indulging in any anti-social acts in the country.

Mr Emmanuel K. Appiah-Dwomoh, Manager of the Institute in his welcoming address expressed concern about the low number of females among the trainees.

He appealed to corporate bodies to assist the Institute since the burden of their up-keep was becoming too heavy for the government alone.

Nii Ephraim, Effutu Municipal Chief Executive was unhappy about the immoral behaviour exhibited in the town by some members of the previous batch of trainees, and said the Assembly will this time not entertain indiscipline on their part urging them to be law abiding.