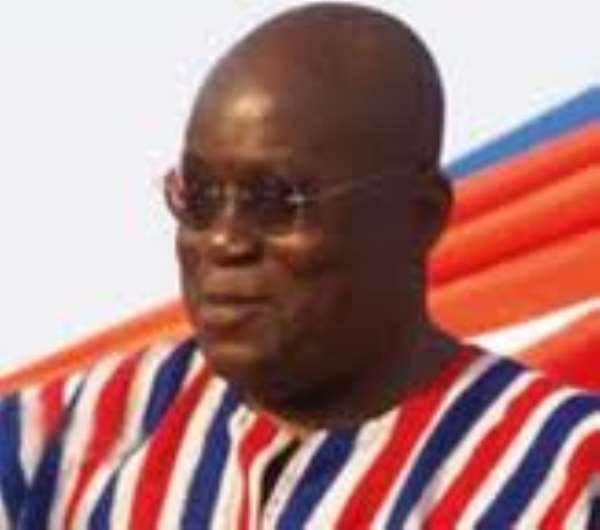 He pledged that when given the power to serve, he would not steal from the people but ensure that development projects were implemented.

Nana Akufo-Addo was speaking at a rally to launch the Fanteakwa NPP campaign for the 2012 elections at Begoro on Friday.

The NPP flagbearer said his vision was to promote peace and development through the creation of jobs and the provision of free secondary school education.

He told the crowd that the easiest way to eliminate poverty was the provision of quality education and the creation of job opportunities for the people, particularly the youth who are the country's future hope.

Nana Akufo-Addo called on the Ghanaian electorate to turn up in their numbers to participate actively in the forthcoming biometric registration exercise which takes place from March 24 to May 5, 2012.

He said it was the only way they could vote out the current government and return the NPP into power to continue with their good economic policies and programmes.

The NPP parliamentary candidate for Fanteakwa, Mr Kofi Agyekum pledged that he would work hard to retain the seat for the party, come December 2012.

He urged Muslims not to be deceived by the NDC that the NPP had no plans for them.

Mr Agyekum said the only party that had the Muslims at heart was the NPP and mentioned former President John Agyekum Kufuor who appointed Alhaji Aliu Mahama as his running mate and Vice President for eight years in office, as well as the running mate for the NPP presidential candidate for the 2008 elections, Dr Mahamudu Bawumia.

He expressed confidence in Nana Akufo-Addo's victory in the December polls and called on all to rally behind the party's flag-bearer, adding that Nana Akufo-Addo was the only presidential candidate to redeem Ghana from the current economic struggles.