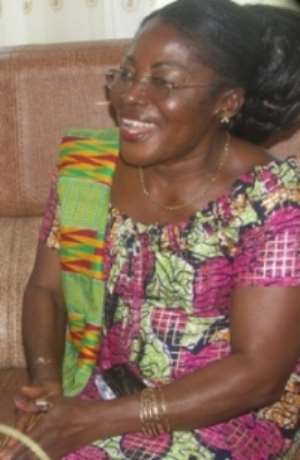 Elmina, Feb. 26, GNA - The perennial flood that engulfs Elmina Tatarkessim and its environs may be a thing of the past when the rains set in this year due to the construction of a drainage system, directed into the Benya Lagoon.

The drain, constructed at the cost of GH¢ 560,000 and funded by a Dutch philanthropist, Henk Vooijs through the Elmina-Gouda Sister City relationship, was directed into the Benya Lagoon.

At a brief ceremony to inaugurate it over the weekend, some 200 school children dropped toy ducklings into the beautiful and well-built drains as they swam gracefully all the way through into the Lagoon as excited residents gleefully run to catch a glimpse.

Mrs. Ama Benyiwa-Doe, Minister for Central Region, expressed gratitude to Henk Vooijs for the gesture and praised the Mayor of Gouda, WimCornelis for the numerous assistance offered to the Komenda-Edina-Eguafo-Abrem (KEEA) Municipal Assembly through his efforts.

The support include the provision of a number of ambulances to the Elmina Health Centre, fire tender to the Fire Service, funds for street naming, the construction of waste disposal sites and the reconstruction of historical buildings constructed by the Dutch in Elmina to beautify the township.

The Minister pointed out that despite the economic recession in Europe and beyond, Gouda City had ably assisted the ancient city of Elmina in its desire to see the Township develop as a tourist attraction and urged the people to desist from throwing garbage into drains and gutters to prevent floods.

The reconstructed drainage system was built in 1685 around a stream called “Akyea” to serve as an irrigation for farmers to water their crops, but with time, the stream dried up leaving the carnal chocked due to insanitary acts of residents.

Mayor Cornelis, who retires in June this year, appealed to the residents and the Assembly to ensure that the drainage system was maintained or the huge amount spent on it would be a waste.

Henk Vooijs said the long standing relationship between the Dutch and Elmina motivated him to finance the construction works and asked the people to keep it neat at all times.

The foul stench that engulfed the area as a result of the chocked drains is gone.

The Municipal Chief Executive, Mr. Isaac Kweku Sam noted that the project would enhance sanitation in the area and ensure good health of the people. He also thanked Gouda City for the numerous assistance to the Municipality.

He was of the hope that the relationship between Elmina and Gouda would grow from strength to strength.