Many injured as dosing driver 'pours' passengers into drain 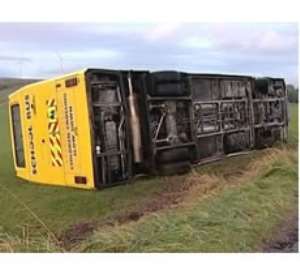 A number of people are reported injured after a Wa-bound bus on which they were travelling veered off the road and landed in a drain early Monday morning at a spot between Bole and Bamboi in the Upper West Region.

A passenger aboard the O.A Tour bus with registration GR 2519 – 10 told Joy FM as many as 20 of the 65 passengers aboard the bus suffered various degrees of injuries after the driver, suspected to have dosed off while the bus was in motion, attempted to pull the bus out of a gutter it initially landed.

He said the driver's attempt rather sent the bus into another drain, causing the bus to overturn and injure some of the passengers who have since been rescued by police and fire personnel and sent to a nearby hospital.

The eyewitness said some passengers may have suffered fractured limbs while others sustained minor injuries.

The incident happened at about 5:00 am but as at 7:00 am, the remaining passengers were still stranded awaiting a promised bus to continue their journey.