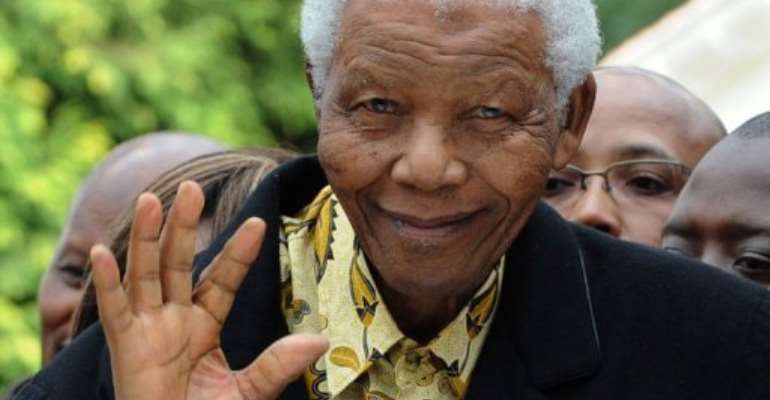 Mandela, pictured in 2009, has been discharged from hospital. By Alexander Joe (AFP/File)

The presidency used Facebook and Twitter to tell the public that "Madiba," as he is affectionately known, had been admitted on Saturday, and later to assure an increasingly worried world that he was not in danger.

"It's a sign of a modern government embracing a modern era. The government has been more organised this time, and their social media activities are an example of that," Matthew Buckland, publisher of South African technology trend site Memeburn, told AFP.

"By the presidency breaking the news themselves and releasing the statement on Twitter, people followed by retweeting the presidency's statement and referring back to this as the original source of the news," he said.

"This is exactly how it should be handled as opposed to mass confusion and multiple, contradicting sources and conjecture."

When Mandela, 93, was hospitalised last year for a respiratory infection, a virtual news blackout sparked panic in a public relations blunder for those handling the legacy of one of the world's best-known people.

This time the presidency took control, announcing his admission and giving an update.

The efforts did not go unnoticed by a nation that increasingly uses smartphones and the Internet.

"I'm not a Zuma supporter, but thank you zuma for let us know about MR. MANDELA. A great deed you did," said another.

Mandela is adored in South Africa for leading a racially divided country into democracy and is exalted internationally as a symbol of forgiveness and freedom.

Any hint of his ill-health immediately goes global, with hip hop giant Russell Simmons urging prayers and Manchester United's Rio Ferdinand calling him the "most inspirational man alive" on Saturday.

The detail-hungry media has offered praise but also criticism. As officials refused to say where Mandela was hospitalised or divulge exact details, unconfirmed reports that he had undergone hernia surgery flowed furiously.

"Last time it was a mess," wrote BBC correspondent Andrew Harding on the British broadcaster's website on Saturday.

"This time the presidency has been ahead of the social media rumours that fuelled much of the confusion in 2011, but the instinct to deny, rather than to say 'no comment,' remains strong, and as before, impatient and contradictory speculation has started to emerge."

South Africa's Sunday Times said the announcement was a substantial if terse improvement, yet warned of signs that similar panic could arise and that "credible, detailed" information was needed to avoid wild speculation.

"The authorities must also accept that there is unprecedented global interest in Mandela's condition and that new media platforms spread rumours rapidly," it said.

The Sunday Independent said the secrecy was inconsistent with the former president's legacy and "negates Mandela's principles of openness."

The tension between the inquisitive role of the press and the state's gatekeeping was healthy and unlikely to go away, Buckland said.

"It's difficult to know where that line is in terms of what they must reveal and what they should hold back," he said, adding that Mandela's privacy had to be respected despite his being a public figure.

"It is a balance, and in this case it feels as if the government got the balance right."