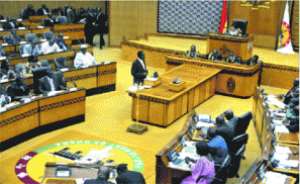 The Speaker of Parliament, Mrs Justice Joyce Bamford, in accordance with Order I72 (2) of the Standing Orders of the House referred the nominations to the Appointments Committee on January 26, 2012 for consideration and report.

The names of the nominees were subsequently published in the media to invite memoranda on the nominees from the public.

The Chairman of the Appointments Committee, Mr Edward Doe Adjaho, who is also the First Deputy Speaker of Parliament, moved the motion for the adoption of the report of the committee for the approval of the nominations.

The Minority Leader, Mr Osei Kyei-Mensah-Bonsu, who seconded the motion, said it was heart-warming that Mr Ocran admitted his mistake during the vetting for describing the newly discovered oil as “dirty oil from Suame” when a sample was shown to the House.

He said members of the House ought to take a cue from this and remember to be candid and truthful when making statements on the floor, since posterity would judge them for what they say on the floor.

On the Information Ministry, he said the general perception was that the ministry was not in the best of shape and called for efforts to ensure accurate gathering and dissemination of information, which was key to sound democratic practice in the country.

Mr Kyei-Mensah-Bonsu said it was unfortunate that what normally came out from the ministry was inaccurate information and pure propaganda that could not help nurture the country’s democracy.

He expressed the hope that the incoming sector minister, Mr Fritz Baffour, who had been a media executive before, was capable of straightening affairs in the ministry so that the deliberate twisting of information would be a thing of the past.

For his part, the MP for Wa West, Mr Joseph Yieleh Chireh, urged the House to support the motion, since all the nominees were selected after a critical analysis of their skills and capabilities.

Contributing to the debate, the MP for Tain, Mr Ahmed Ibrahim, urged Mr Baffour to make it his priority to resource the Information Service Department to enable it to play its critical role of informing Ghanaians of government policies and programmes.

Story: Samuel Doe Ablordeppey READ BY AA
Parliament yesterday approved the first tranche of US$850 million out of the US$3 billion China Development Bank (CDB) loan secured by the government for infrastructural development.

After this approval, the next hurdle is to give a legal backing to the Offtaker Agreement between the government and Unipec Asia Company Limited for the sale and purchase of Ghana’s crude oil under the Master Facility Agreement.

Since early last year, the government started discussions with the CDB to secure a total of US$3 billion to finance ambitious infrastructural projects in some parts of the country, including the US$850 million Western Corridor Gas Infrastructure Project.

The Minister of Finance and Economic Planning, Dr Kwabena Duffuor, told the Daily Graphic shortly after the approval of the agreement that the government had prepared the ground for the quick application of the funds.

He said the funds would become readily available shortly after Parliament approved the Offtaker agreement by the close of yesterday.

The Parliamentary Committee on Finance, and Energy, by a majority decision respectively recommended the loan agreement for approval on Wednesday, February 22, 2012, which Parliament subsequently approved on February 23, 2012.

Last December, the International Monetary Fund (IMF) and the World Bank raised Ghana’s eligibility to borrow on commercial terms from $700 million to $3.4 billion.

Meanwhile, the Ghana National Gas Company Limited yesterday confirmed that it had moved the site for the gas processing plant to Atuabo for operational reasons.