PPP poised to cause major political upset in Ghana's history-Nduom 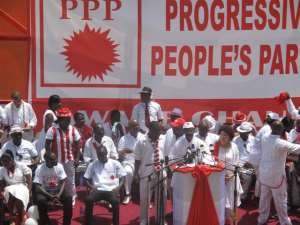 Accra, Feb 25, GNA -The Progressive People's Party (PPP), on Saturday said it was poised to cause a major upset in Ghana's political history, as the political movement geared itself to win the Election 2012, though the major political parties have more following.

According to the PPP, most Ghanaians, irrespective of their political ideologues and leanings, were disenchanted with the current state of affairs in the country, and wanted genuine change, which the PPP had to offer the nation when given the mandate to rule.

“We know there are people who look upon us with scepticism. Some say we are wasting our time and money…But we are confident that majority of Ghanaians are ready to vote for the Progressive People's Party. And Ghanaians have a big choice to make in 2012-stagnation or progress”, said Dr Paa Kwesi Nduom, sole presidential aspirant of the PPP.

He was speaking at the maiden national convention of the party at the VIP wing of the Accra Sports Stadium, where thousands of supporters bedecked in the party's paraphernalia had gathered for the euphoric occasion.

The platform was used unveil the party's political direction, major stakeholders, its rules for governance and its projections and plans for participation in the upcoming general elections.

Dr Nduom, who recounted the biblical story of how David used a smarter, wiser way to defeat Goliath, said the two “political Goliaths” in Ghana's political landscape, the National Democratic Congress (NDC) and the New Patriotic Party (NPP), would be deposed by “PPP David”.

“We are asking Ghanaians to exercise their faith not just in church or in a mosque, but in daily living and give David PPP a chance!

“So I ask all of you. Can the PPP defeat the NPP and the NDC? Yes we can.” In Benin, candidate Yayi Boni came from nowhere to defeat the so-called major parties in Benin to become President.

“Can the PPP come from nowhere to defeat the so called major political parties in Ghana? Yes we can. Not long ago, candidate Michael Sata polled three percent of the presidential vote and his party won one seat in parliament. Today, he has become the President of Zambia. He did what some considered the impossible.

“Now I ask you, can the PPP do the impossible in Ghana? Yes we can.”

Dr Nduom was emphatic that no political party had the advantage of a single vote yet in Election 2012 and said that when the Electoral Commission open the biometric voters' registration on march 24, “we will encourage, educate and work with our people and supporters to go and register to vote.

“Over one million people are eligible to vote for the first time since the 2008 elections...And we are going to work, sacrifice and do whatever we need to do to win as many of them, as possible to become members and supporters.

“We encourage all Ghanaians to join our party now so that we can build the alternative that will bring the changes we need.”