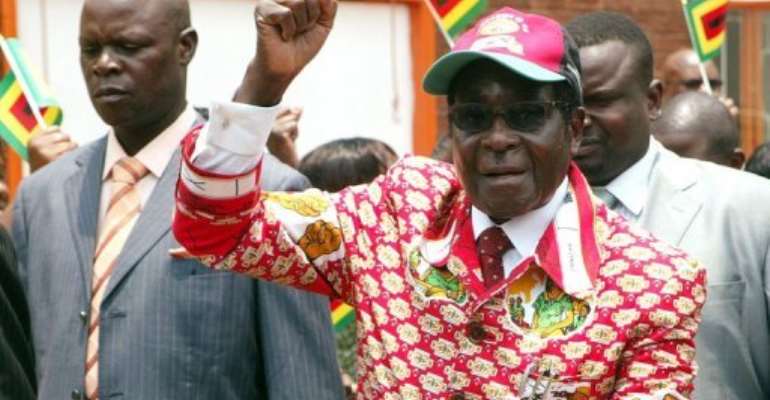 At 88, Mugabe is Africa's oldest leader. By Jekesai Njikizana (AFP)

MUTARE, Zimbabwe (AFP) - Zimbabwe's President Robert Mugabe marked his 88th birthday with a trademark attack on gays and foreigners at a mass rally of his supporters on Saturday to celebrate the occasion.

He told British Prime Minister David Cameron "to hell with you" over his calls to respect gay rights and accused non-governmental organisations of trying to destabilise the country, at a birthday rally in the eastern border town of Mutare.

"NGOs come with these stupid ideas, some to destabilise us. Quite often they support one party. We say to them get away from our country. Leave us to solve our political problems. Leave us to manage our own systems," Mugabe said.

"Nature is nature. It has created male and female," Mugabe said. "That's how we were born, so we reject that outright and say to hell with you."

He also urged voters to reject gay rights in a new constitution, currently being drafted as a key step toward new elections to replace Mugabe's rocky unity government with Prime Minister Morgan Tsvangirai.

But he urged his supporters not to resort to violence, as debate over the charter and the date for new polls has intensified over the last week, with Mugabe insisting on fresh polls this year.

"We used to fight each other. Time has come for us to do our politics in a much more cultured way. Although our differences are ideological and sometimes quite negative, we should not regard them as a source of hatred.

"Those who are opposed to us are also part of our society. We should recognise their rights. So, no to violence. No, no, no violence."

Every election in Zimbabwe since 2000 has been marred by violence, most recently the 2008 presidential run-off in which Tsvangirai says more than 200 of his supporters were killed, prompting him to pull out in hopes of curbing the unrest.

Mugabe turned 88 on Tuesday declaring himself "fit as a fiddle". He has already been endorsed as his party's candidate in the next elections, whenever they are held.

Tsvangirai vowed Friday to resist Mugabe's push for new elections this year, saying he would not contest polls that come before reforms including a new constitution and a raft of changes to electoral and media laws.

Mugabe's party in Mutare began with a beauty pageant, and was to include a football cup final dubbed the "Bob at 88 Cup", with a concert by the country's top musicians set for later in the evening.

Up to 20,000 people were expected to attend, according to provincial officials. As people trickled into the stadium, a military band played music praising Mugabe, while drum majorettes went through their drills.

Mugabe's supporters wore party shirts with his portrait emblazoned on the front and back while had T-shirts with Mugabe's signature.

Cakes donated by local companies were displayed at the centre of the pitch, including one with a crocodile, another with the design of the mountains surrounding Mutare, and a third was shaped like the Victoria Falls.

Some supporters hoisted banners with messages like "Long Live the President" or hailing Mugabe as "The Lion of Africa".

What Will The Publication Of 260-Page Cocoa Road Audit Repor...
22 minutes ago