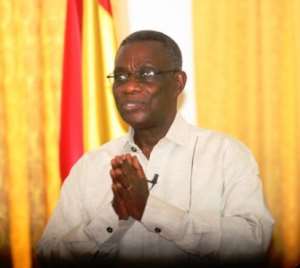 Accra, Feb. 24, GNA – President John Evans Atta Mills has charged Ministers of State and other government appointees to work harder ahead of election 2012 to ensure a resounding victory for the ruling National Democratic Congress (NDC).

President Mills made the call when he formally swore into office nine new appointees made up of six Ministers and three Deputy Ministers of State on Friday in Accra. He told them that they had to apply themselves diligently to the positions given them.

The President said the people of Ghana expected nothing from the Ministers but to work to improve their standard of living, reminding them that the NDC as a social democratic party was committed to uplifting the status of the weak, the vulnerable and the defenceless.

They took the Oath of Allegiance, Oath of a Minister or Deputy Minister and Oath of Secrecy administered by the President.

They then signed the Oath Book and received the Instrument of Office in a form of a scroll painted in Ghana's national colours of red, yellow and green; presented to them by President Mills.

President Mills congratulated them on their appointments, reminding them that it was based on the confidence government had in their ability to work to improve the lot of Ghanaians who elected the government into power.

He urged the Ministers to be committed to the oaths they took reminding them that no one was above the other and that teamwork was what was needed to execute the mandate the people had given to government.

He advised them to place the interest of the nation above everything else and pray to God for an answer whenever they found themselves in a problem.

“Pray to God; He will give an answer. Once you go there with an open mind and desire to learn the Lord will help you,” President Mills said.

He called on the appointees to contribute to the victory of the NDC in the 2012 election and for the success of a second term in office.

Mr Henry Martey Newman, Chief of Staff at the Office of the President advised the appointees to quickly get themselves involved “in the nuances of a Minister,” and to assume their responsibilities with alacrity.

“You need to serve. You are in politics to serve the people who elected you,” Mr Newman said and assured them of government's cooperation and support in the discharge of their duties.

Mr Moses Asaga, Minister for Employment and Social Welfare on behalf of his colleagues assured the President that they would work together with their colleagues to ensure that NDC retained power in the December 2012 general election.

“Come January 2013 you will be patting us on our backs for a good job done," Mr Asaga said.