Towards the full integration of revenue agencies;GEN. MODEY IN A COUP PLOT? 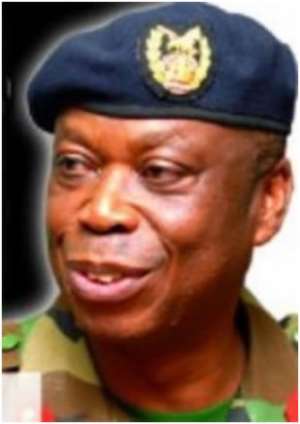 Never mind President John Mills' kind words for the management and staff of the Ghana Revenue Authority (GRA) for remarkable achievement in the last three years during his state of the nation address to Parliament last Thursday, all is not glowing at the CEPS.

The Al-Hajj can today report that a very serious incident, which could have had far- reaching negative consequence for the future of the nation's fiscal health and democracy, could have happened on Monday 6th February but for the timely intervention of President John Mills

On the morning of that fateful day, red flags were raised and red bands worn by a group of renegades at the premises of the Headquarters of Customs, Exercise and Preventive Service (CEPS), a para-military organization responsible for the nation's 'first line of defence', and under the guise of a usual morning muster parade, turned the whole object into a durbar, allegedly, at the behest of Major-General Carl Modey, Commissioner in charge of CEPS.

A source at the event disclosed to this paper that, Major-General Carl Modey, who, it is believed instigated the 'drama', used the occasion at the durbar to pour out his own 'dissatisfaction' with the method of integrating the three major revenue agencies; CEPS, Internal Revenue Service (IRS) and the Value Added Tax service (VAT) into one single entity now known as; Ghana Revenue Authority (GRA).

The GRA Act 2009-Act 791 seeks to merge all three tax revenue agencies, CEPS, IRS, the VATS and the Revenue Agencies Governing Board (RAGB) Secretariat into one organization to be headed by a Commissioner-General, who is vested the powers of all the three Commissioners, (CEPS, IRS & VAT) who though shall on his behalf; continue to preside over their respective organizations,.

The Al-Hajj is reliably informed that in spite of the relative successes the GRA chalked with the integration two years ago, (a feat that obliged the president to mention them in dispatch in his state of the nation); it is not without some challenges.

Investigations revealed that since his appointment as Commissioner of CEPS, Major-General Modey, a senior armed forces officer, used to taking full command of his troops, is not only having serious reservations with the integration of his outfit as required by law, but also, becomes a subordinate to a new 'creature' referred to as-Commissioner-General, and a civilian at that.

A highly placed source revealed to The Al-Hajj that, Commissioner Modey's uneasiness with the new arrangements was exacerbate when, it was further required of all Commissioners CEPS, IRS & VAT to move to the Head Offices to work directly under the supervision of the Commissioner-General, Mr. George Blankson.

Clearly bemused and with the deadline to leave CEPS Headquarters approaching, General Modey, the source disclosed, began stirring sections of the staff of CEPS (Who ironically opposed his appointment as Commissioner) to 'revolt' in order to scuttle his planned movement.

At the supposed durbar on the morning of Monday 6th of February, General Modey, according to our source, lamented to the assembled officers and men about his frustrations in the integration processes and his imminent departure from the CEPS headquarters to join his colleagues Commissioners at the GRA head office. This we are told drew the anger of some of the CEPS personnel assembled who shouted; No No No, to wit; showing their disapproval of him leaving the CEPS headquarters.

This near act of rebellion by members of CEPS (an important revenue earner for Ghana) spearheaded by their Commissioner, General Modey immediately got to the attention of the President, John Mills who in his usual fashion, quickly summoned General Modey and leadership of his rebellion group and others from the GRA to the Castle on Wednesday, 8th February 2012.

After carefully listening to the views of all sides, the president himself an accomplished tax expert ably supported by his professional colleague who also is a Deputy Minister of Finance, Seth Tekper; unequivocally ordered General Modey to comply with the arrangements to move to the GRA Head Office.

The president's swift intervention and rational decision according to our source is expected to bring to an end a development which could have had serious consequences for the realization of a one revenue authority for Ghana as it pertains in other countries such as, South Africa, Zambia, United Kingdom and others, and also a fulfillment of the presidents' and the National democratic Congress' (NDC) 2008 campaign pledge to the good people of Ghana.

When reached for his response to these charges, Major-General Carl Modey through his spokesperson, one Robert Mensah of CEPS PR department, though admitted there was durbar on the said Monday and a meeting with the president; he refuted all the other allegations.

Mr. Mensah, whiles conceding that it is true that some management members of CEPS have some reservations relative to the final migration of CEPS into the integrated GRA, he nevertheless said Commissioner Modey is willing, and has actually, begun the move to the Headquarters of GRA.

According to him, some of the challenges causing some apprehensions amongst staff and management of CEPS have to do with finance and procurement, though he didn't elaborate.

Checks from the Al-Hajj however revealed that the General and his lieutenants at CEPS are unwilling to move to the GRA head office despite president's intervention.

Major-General Carl Modey until his appointment as Commissioner of CEPS on the 30th of November 2010 was the Deputy Force Commander and Chief Military Observer with the United Nations Mission in Liberia.

He has held other important staff and command positions in and outside Ghana, including Commanding Officer of the 38 Engineer Regiment, Teshie, Accra and Brigade Commander with the United Nations Mission in the Democratic Republic of Congo. He is a Graduate Member of the Ghana Chartered Institute of Administration and Management.