Veep: Bribe-takers are accessories to murder 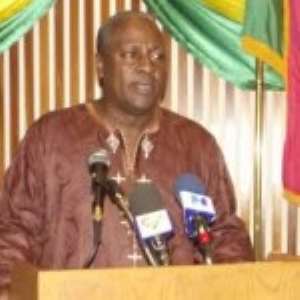 Nobe Appiah
ACPAwuni Angwubutoge
Vice President John Dramani Mahama has urged agencies charged with the responsibility of ensuring safety on our roads to discharge their duties in a manner that would serve the interest of the country, instead of taking a few cedis from drivers and allow them to do the wrong things.

'If you are up and doing in your job - you are saving lives and Mother Ghana. But, anytime an overloaded or a defective vehicle passes by, and you take GH¢5 or GH¢10, and let them pass, you are an accessory to murder,' he asserted.

He has, therefore, cautioned the law enforcement agencies to be up and doing, by enforcing the by-laws governing the sector to reduce carnage on the roads to the barest minimum, if not totally eliminated.

We must enforce the laws, and the institutions responsible for this must be up and doing,' noted Mr. Mahama.

The Vice President made this observation when he officially cut the sod for the smooth take off of the operations of the Road Safety Management Services Limited in Accra yesterday.

According to the Vice President, perceived corruption in the institutions responsible for ensuring road safety in the country should be a thing of the past, since their actions also make them contributors to murder.

He called on all Ghanaians to lend a helping hand in the fight against carnage on the country's roads, since its cost to the state's GDP was enormous.

'Road accidents cost the country 1.6% of GDP every year in Ghana. If you take the size of GDP as at 2009, the value amounts to about $500 million. Today, Ghana's GDP is 60% higher. So, multiply $500 million by 60%, and you will get the true amount of what the country loses each year,' Mr. Mahama estimated.

Continuing with his statistics on the fatalities of road crashes in the country, the Vice President said available information to his office indicated that the country records 12,000 road accidents each year, out of which 180 people lost their lives, with the remaining number sustaining various degrees of injuries.

The situation, he noted, was unacceptable, and urged the Police, the Ghana Road Safety Commission, the Driver and Vehicle Licensing Authority (DVLA), Road Safety Management Services Limited, and other stakeholders in the road sector to ensure that traffic regulations are strictly adhered to by drivers and other road users.

He attributed the carnage on the country's roads to a number of factors, some of which include driving under the influence of alcohol, over-speeding, construction of good roads, and unauthorised parking among many others.

He recalled a situation where the recently-commissioned George Walker Bush Motorway had killed ten people to buttress his argument in the construction of good roads in the country.

'This is unacceptable. Why should a development that is positive, and is going to bring joy and celebration in the country, turn out to bring sorrow and grief to the people?' he quizzed.

Speaking at the event, the General Manager of Road Safety Management Services Limited, Air Commodore Basin Dery (Rtd), said his outfit was created from the concerns raised by the Vice President, and urged Ghanaians to remain calm, since they were in to deliver good services that would arrest the situation.

According to him, the RSMSL was poised to provide road safety management services that has never be seen in the country and West Africa before, since they had the expertise and tools to change the industry landscape to provide confidence, security, and safety to the travelling public.

Their operational concept, he told the public, involves establishing 45 well-secured depots across the country, that would be equipped with various categories of tow trucks, ambulance to convey accident victims to hospitals, police motorbikes for rapid response to accident scenes, large parking area, workshops or garages for repair and maintenance of vehicles, filling station with car wash and vulcanizing services, as well as rest stop with restaurants.

Among the services to be delivered by the RSMSL, The Chronicle learnt include, rapid vehicle towing services, where 88 tow trucks of various categories would be used in providing services to the general public, large parking lots for towed disabled vehicles, emergency paramedical and ambulance services to victims of accidents, repair and maintenance services, as well as support the police by enhancing their presence, efforts, and activities in the area of road safety.

According to Air Commodore Dery (rtd), the services that would be provided by his outfit would be fully backed by a 24/7 call centre, where all distress calls would be routed, using toll-free numbers, for rapid deployment of emergence services response from a depot closest to the distress scene.